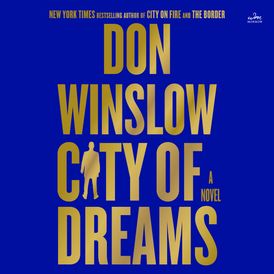 Following the epic, ambitious, instant New York Times bestseller City on Fire, “The Godfather for our generation” (Adrian McKinty), comes the dramatic second novel in an epic crime trilogy from Don Winslow, #1 internationally bestselling author of the Cartel trilogy (The Power of the Dog, The Cartel and The Border).

The city where dreams are made.

On the losing side of a bloody East Coast crime war, Danny Ryan is now on the run. The Mafia, the cops, the FBI all want him dead or in prison. With his little boy, his elderly father and the tattered remnants of his loyal crew of soldiers, he makes the classic American migration to California to start a new life.

But the Feds track him down and want Danny do them a favor that could make him a fortune or kill him.

And when Hollywood starts shooting a film based on his former life, Danny demands a piece of the action and begins to rebuild his criminal empire.

Then he falls in love.

With a beautiful movie star who has a dark past of her own.

As their worlds collide in an explosion that could destroy them both, Danny Ryan has to fight for his life in a city where dreams are born.

Or where they go to die.

From the shores of Rhode Island to the deserts of California where bodies disappear, from the power corridors of Washington where the real criminals operate to the fabled movie studios of Hollywood where the real money is made, City of Dreams is a sweeping saga of family, love, revenge, survival and the fierce reality behind the dream.

“A masterwork of mob fiction. . . City on Fire does for Rhode Island what David Chase’s The Sopranos did for New Jersey. . . It’s Winslow’s ways with character, as well as his fluid narrative and highly visual scene-setting, that suggest this novel, the first in a planned trilogy, could well end up in the American-mob canon along with the works of Puzo, Scorsese and Chase.” — Washington Post

“Epic, ambitious, majestic, City on Fire is The Godfather for our generation.” — Adrian McKinty, #1 international bestseller and New York Times bestselling author of The Chain

“[Winslow’s] books. . . . are adrenalized plot machines whose pages seem to turn themselves. . . . You don’t read City on Fire so much as you let it take you for a ride.” — USA Today

“Pure genius! Nobody can bring such grit and such heart to crime fiction as Don Winslow—and with such a unique and compelling stylistic voice. This sprawling novel, populated with breathtakingly real characters, will grip you from the first page and never loosen its hold, and that remains true long after you’ve turned the last page. And what a delight that this is the first of a trilogy. Can hardly wait for the others!” — Jeffery Deaver on City on Fire

“As he did in the Cartel trilogy, Winslow adeptly manages the comings and goings of a large cast of characters. . . . By the end of this well crafted, troubling epic, enough people are left standing to offer hope of a future for these deeply flawed families. That, plus a hint that Danny Ryan is heading to a ‘warmer shore,’ should lure readers to the next installment of what’s shaping up as Winslow’s next juggernaut of a modern-day epic.” — Los Angeles Times on City on Fire