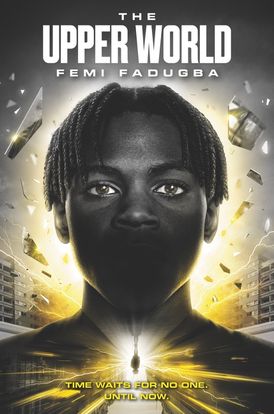 If you had the chance to change your future, would you take it?

Perfect for fans of Neal Shusterman and Jason Reynolds, this powerhouse, mind-bending YA debut follows two teens, a generation apart, whose fates collide across time—and outside of it.

During arguably the worst week of Esso’s life, an accident knocks him into an incredible world—a place beyond space or time, where he can see glimpses of the past and future. But if what he sees there is true, he might not have much longer to live, unless he can use his new gift to change the course of history.

Rhia’s past is filled with questions, none of which she expects a new physics tutor to answer. But Dr. Esso’s not here to help Rhia. He’s here because he needs her help—to unravel a tragedy that happened fifteen years ago. One that holds the key not only to Rhia’s past, but to a future worth fighting for.

Soon to be a major Netflix movie starring Oscar winner Daniel Kaluuya! (Get Out, Black Panther, Judas and the Black Messiah)

"To have a book that marries real London life, time travel, and relativity in an illuminating and entertaining way is stuff I used to dream about. I had The Upper World in my hands until I finished it. So happy this exists." — Daniel Kaluuya

"A time-twisting, mind-bending thrill ride. If I could read at the speed of light, I would have!" — Holly Jackson, #1 New York Times bestselling author of A Good Girl's Guide to Murder

“An intense debut novel...The science is complex, but the central, emotional stakes are universal: Can we change the past? Dare we hope for a better future?" — Booklist

"The Upper World took everything I thought I knew about physics, time, space, and energy, and twisted it into a new, electrifying story that I couldn't put down!" — Brittney Morris, nationally bestselling author of Slay

“A mind-bending thriller that takes you to modern-day London and then twists reality back in on itself. Tenet has nothing on The Upper World.” — Maureen Johnson, New York Times bestselling author of the Truly Devious series

“So much is packed into this relatively short audiobook…. But at its heart, it is a story of connection: to ourselves, others, and our communities. Important and relatable for all.” — Booklist (starred review)

“Fans of Jason Reynolds and Neal ­Shusterman won’t be able to put down this electrifying debut.” — School Library Journal

Femi Fadugba has a Master's degree from Oxford University, where he published in Quantum Physics and subsequently studied as a Thouron Scholar at University of Pennsylvania. Femi has worked as a science tutor as well as in solar energy and consulting. He currently lives between Peckham, London, and Baltimore, USA. The Upper World is his first book.

Other Works by Femi Fadugba