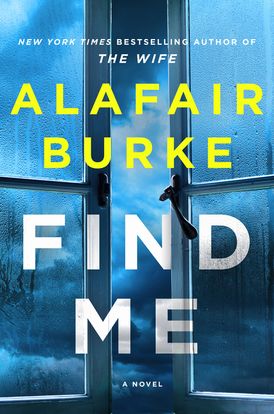 “Alafair Burke's latest propulsive thrill-ride is a suspenseful, twisty mystery about memory, friendship and secrets. A page-turner of the highest order.” -Laura Dave, author of The Last Thing He Told Me

The disappearance of a young woman leaves her best friend reeling and an NYPD homicide detective digging into her own past in this twisty mystery about the power of female friendships. From the New York Times bestselling author of The Better Sister and The Wife.

She calls herself Hope Miller, but she has no idea who she actually is. Fifteen years ago, she was found in a small New Jersey town thrown from an overturned vehicle, with no clue to her identity. Doctors assumed her amnesia was a temporary side effect of her injuries, but she never regained her memory. Hope eventually started a new life with a new name in a new town that welcomed her, yet always wondered what she may have left behind—or been running from. Now, she’s leaving New Jersey to start over once again.

Manhattan defense lawyer Lindsay Kelly, Hope’s best friend and the one who found her after the accident, understands why Hope wants a new beginning. But she worries how her friend will fare in her new East Hampton home, far away from everything familiar. Lindsay’s worst fears are confirmed when she discovers Hope has vanished without a trace—the only lead a drop of blood found where she was last seen. Even more ominously, the blood matches a DNA sample with a connection to a notorious Kansas murderer.

With nowhere else to turn, Lindsay calls NYPD homicide detective Ellie Hatcher, the daughter of the cop who dedicated his life to hunting the Kansas killer. Ellie has always believed there was more to the story of her father’s death twenty years earlier—and she now fears that Hope’s recent disappearance could be related.

In pursuit of answers, the women search for the truth beneath long-buried secrets. And when their searches converge, what they find will upend everything they’ve ever known.

“The novel has a nice Hitchcockian feel to it as it glides from New Jersey to East Hampton to Wichita.” — Washington Post

“Irresistible . . . .Burke’s arrangement of all the puzzle pieces is wick­edly clever, as are the twists she gives them just when you think you know some­thing. Find Me is beautifully crafted, a swift and gripping read. And those twists keep coming at you until the very last paragraph.”
— Tampa Bay Times

“The two women feverishly piece together the disparate parts of the story, and Burke’s masterful control over pacing and plot reveals will make readers just as anxious to uncover the truth.” — BookPage

“Burke is a master at plotting and pacing, and doesn’t disappoint here. Not only is this book a true page-turner with an intricate story and well-rounded cast of characters, but it combines a couple of my favorite plot points—amnesia and missing persons—and leads to an exquisite eleventh-hour shocker.” — CrimeReads

"Alafair Burke’s Find Me is a total knockout—serpentine in structure, rich in emotional heft and deeply moving as the past comes back not just to haunt the characters but to shudder through their lives, revealing secrets big and small, dangerous and intimate. Not to be missed.” — Megan Abbott, author of The Turnout

“Find Me is a gem, the sort of smart, suspenseful, slow burn that I love. The tension is palpable on every page, and I savored every surprise. Alafair Burke is a treasure.” — Chris Bohjalian, author of The Flight Attendant and Hour of the Witch

“From one of our greatest contemporary mystery writers comes another superb nail-biting thriller. Alafair Burke uses an intricately layered and twisty plot to ensnare us and then pulls us in for a close examination of intimacy and community. I devoured it, from its riveting first scene to the shocking last page. — Angie Kim, author of Miracle Creek

"Alafair Burke once again weaves a riveting web of a story, threaded with delicious characters and hot button social issues. If you’re looking for the perfect twisty mystery, you’ve found it in Find Me." — Janelle Brown, author of Pretty Things

“Alafair Burke is back in this gripping, head-spinning thriller of the first order. FIND ME is a perfect read: the writing is engaging, the twists are perfectly executed and the exploration of female friendships and identity offers satisfying heft to the plot. I can't wait for Burke's next.”  — Cristina Alger, author of Girls Like Us