The Mythics #2: Hailey and the Dragon 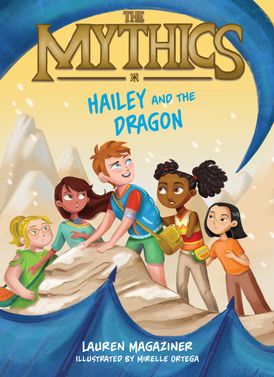 The Mythics #2: Hailey and the Dragon

After Pairing Day didn’t go as planned for the Mythics—Marina, Hailey, Kit, Ember, and Pippa—they embrace their journey to find their Mythies and save Terrafamilar. Hailey has always known she was destined for adventure, and after watching Marina and Ember unite with their mythical animal familiars, she’s more than ready to embark on her quest.

Buzzing with excitement and running full speed ahead, Hailey is still adjusting to being part of a team. She’s used to leading the charge on her own, but now she has four other girls she can count on—and she’ll need them on this journey.

Golden Jumpsuit is after the Mythics, and she might have allies all over Terrafamiliar. How will Hailey and the Mythics figure out who to trust when they’re still working on trusting each other? The fate of Terrafamiliar is in their hands.

Praise for Book 1 in Case Closed Series: “The ‘choose your own adventure’ format adds a fun twist, offering readers different options, like whom to interview, what to examine, and which clues to follow. An entertaining romp that will appeal to fans of humorous mysteries.”  — School Library Journal

"The characters are real kids dealing with real worries. Carlos is so concerned about money that he takes on the near-impossible task of solving a case for his mother, but it’s this concern that makes him endearing. The various options mean the story takes on a new flavor with every reading. The puzzles are based in learning, so readers work to solve each clue before moving on to the next. Magaziner blends the fun of interactive stories with a suspenseful mystery and delightful characters."  — Booklist

Praise for The Only Thing Worse Than Witches: “Readers will banish themselves from the ordinary world to finish this book in a flash.”  — Kirkus Reviews (starred review)

"The kids’ slowly forming friendship has real grace and authenticity."  — Bulletin of the Center for Children’s Books

“Humorous and engaging.”  — ALA Booklist

Lauren Magaziner is the author of the Case Closed series, Wizard-match, Pilfer Academy, and The Only Thing Worse than Witches. She is originally from New Hope, Pennsylvania, and she currently lives in Philadelphia, where she writes full-time. On Lauren’s Pairing Day, she bonded with her purrfect familiar: a warm, cuddly, and charmingly cantankerous cat. You can visit Lauren at www.laurenmagaziner.com.

Other Works by Lauren Magaziner

Mirelle Ortega is a Mexican writer and illustrator for kidlit and animation. The many children’s books she's illustrated include her author-illustrator debut picture book, Magic; the Love Sugar Magic series by Anna Meriano; Pepe and the Parade by Tracey Kyle; and Small Room, Big Dreams by Monica Brown. Mirelle lives in Los Angeles, and you can visit her at www.mirelleortega.com.

Other Works by Mirelle Ortega

The Mythics #1: Marina and the Kraken

Case Closed #4: Danger on the Dig

Case Closed #3: Haunting at the Hotel

Case Closed #2: Stolen from the Studio

Case Closed #1: Mystery in the Mansion