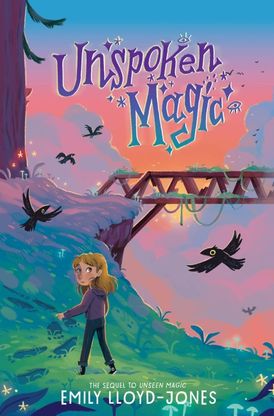 Deep in the redwoods, in a magical town, anything can happen, and any creature—or monster—could exist. But when a team of myth-busters comes to Aldermere, they threaten its very existence—and eleven-year-old Fin will do anything to protect her home. For fans of Nevermoor and Amari and the Night Brothers, Emily Lloyd-Jones’s sequel to the acclaimed Unseen Magic is a story of trusting yourself and finding the friends who believe in you, no matter what.

Aldermere is a town with its own set of rules: there’s a tea shop that vanishes if you try to force your way in, crows that must be fed or they’ll go through your trash, and a bridge that has a toll that no one knows the cost of. Some say that there may even be bigfoots wandering through the woods.

It’s been six months since Fin saved Aldermere from someone intent on exploiting its magic. With spring break just around the corner, Fin’s plans are to relax, try to train her new raven friend, and read some of the mystery books she loves. But her plans are derailed when Fin and her friends find a baby bigfoot who’s been separated from her pack.

Then a film crew shows up, intending to add Aldermere to their web show debunking strange and magical legends. Fin can’t let the film crew put the bigfoot—and Aldermere—at risk. Now, Fin, Eddie, and Cedar must keep the bigfoot hidden and find a way to track down her family. But Cedar’s been hiding a secret of her own; one that may complicate everything.

As monsters, friends, and enemies collide, Fin, Eddie, and Cedar have to trust one another with secrets both good and bad if they’re going to save the town they all love.

Emily Lloyd-Jones crafts a novel infused with magic that is sometimes wonderful and charming—and sometimes dangerous. The sequel to Indie Next Pick Unseen Magic, Unspoken Magic is perfect for fans of Christina Soontornvat’s A Wish in the Dark and Claribel A. Ortega’s Ghost Squad.

Emily Lloyd-Jones grew up on a vineyard in rural Oregon, where she played in evergreen forests and learned to fear sheep. She has a BA in English from Western Oregon University and a MA in publishing from Rosemont College. She is a former bookseller and the author of four young adult novels, including the Indie Next Pick The Bone Houses. Emily Lloyd-Jones lives in Northern California. www.emilylloydjones.com

Other Works by Emily Lloyd-Jones