Eyes That Speak to the Stars 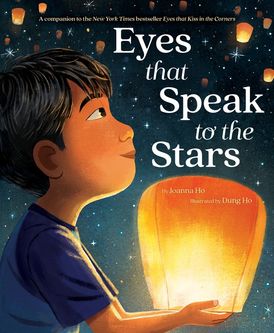 Eyes That Speak to the Stars

New York Times bestselling team Joanna Ho and Dung Ho present Eyes That Speak to the Stars, companion to the acclaimed Eyes That Kiss in the Corners.

“A brilliant treatise to love of self and heritage.” —School Library Journal (starred review)

“A beautifully validating book that builds on the necessary work of its predecessor.” —Kirkus

“Affirmative poetry about a child’s eyes and the tale they tell about him. An uplifting read.” —Booklist

A young boy comes to recognize his own power and ability to change the future. When a friend at school creates a hurtful drawing, the boy turns to his family for comfort. He realizes that his eyes rise to the skies and speak to the stars, shine like sunlit rays, and glimpse trails of light from those who came before—in fact, his eyes are like his father’s, his agong’s, and his little brother’s, and they are visionary.

Inspired by the men in his family, he recognizes his own power and strength from within. This extraordinary picture book redefines what it means to be truly you.

Eyes That Kiss in the Corners received three starred reviews and was embraced as "breathtaking," "lyrical," and "poignant." This companion volume is sure to be welcomed with equal joy.

An Amazon January Best Book of the Month

“As reassuring as the first book, willing to reach to the constellations as well as back through time to show what these eyes have seen, this entry not only complements the original, but extends the conversation beyond history and into a future of possibilities.”  — School Library Journal (starred review)

“In this poetic celebration of body diversity, family, and Chinese culture, the author picks up on themes introduced in her New York Times bestselling picture book, Eyes That Kiss in the Corners (2021)... A beautifully validating book that builds on the necessary work of its predecessor.” — Kirkus Reviews

“Fans of the first book will recognize the vivid and grand illustrations, from starry dragons to deities, juxtaposed with everyday scenes like playing chess with Agong (grandpa) or waking up Di-Di (baby brother). By the end, the boy has transformed into a fighter who owns his story amid the refrain, "eyes that rise to skies and speak to the stars."  — Booklist

Joanna Ho is passionate about equity in books and education. She has been an English teacher, a dean, and a teacher professional development mastermind. She is currently the vice principal of a high school in the San Francisco Bay Area. Homemade chocolate chip cookies, outdoor adventures, and dance parties with her kids make Joanna’s eyes crinkle into crescent moons. Her books for young readers include Eyes That Kiss in the Corners. Visit her at www.joannahowrites.com and @JoannaHoWrites.

Other Works by Joanna Ho

Dung (pronounced Dzung) Ho is a New York Times bestselling illustrator based in Ho Chi Minh City, Vietnam. Her work focuses on children’s books. She also loves to draw interesting characters with unique personalities. When she’s not drawing, she enjoys cooking, watching movies, walking, and tending to her plants. Visit her at www.behance.net/hanhdung.

Other Works by Dung Ho

The Silence that Binds Us

Me and Ms. Too

Playing at the Border

Eyes That Kiss in the Corners