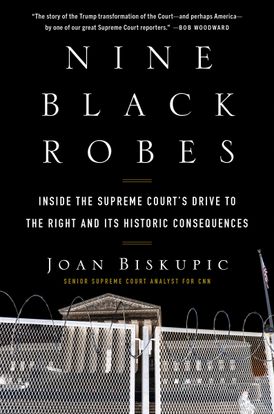 CNN Senior Supreme Court Analyst Joan Biskupic provides an urgent and inside look at the history-making era in the Supreme Court during the Trump and post-Trump years, from its seismic shift to the Right to its controversial decisions, including its reversal of Roe v. Wade, based on access to all the key players.

Nine Black Robes displays the inner maneuverings among the Supreme Court justices that led to the seismic reversal of Roe v. Wade and a half century of women’s abortion rights. Biskupic details how rights are stripped away or, alternatively as in the case of gun owners, how rights are expanded. Today’s bench—with its conservative majority—is desperately ideological. The Court has been headed rightward and ensnared by its own intrigues for years, but the Trump appointments hastened the modern transformation. With unparalleled access to key players, Biskupic shows the tactics of each justice and reveals switched votes and internal pacts that typically never make the light of day, yet will have repercussions for generations to come.

Nine Black Robes is the definitive narrative of the country’s highest court and its profound impact on all Americans.

"This is the story of the Trump transformation of the Court—and perhaps America. Joan Biskupic is one of our great Supreme Court reporters and here, in Nine Black Robes, she skillfully blends the public record with her own reporting from a majority of the justices." — Bob Woodward, Washington Post reporter and author or co-author of 15 #1 New York Times bestselling books

“Piece by piece in her meticulously crafted books and newspaper coverage, Joan Biskupic has built a reputation as the nation's most astute observer of the Supreme Court. All of that seemed in preparation for Nine Black Robes, a seminal work that reveals in sharp detail the atomization and politicization of a once-revered institution in the Trump era.” — David Maraniss, Pulitzer Prize-winning biographer

"The best Supreme Court reporter in the country has done it again. In Nine Black Robes, Joan Biskupic brings readers into their cloistered chambers, details motivations and maneuvering, life stories and leadership, with scoop after scoop on the internal machinations that have led to decisions with very real consequences for the American people." — Jake Tapper, host of The Lead with Jake Tapper on CNN

“Joan Biskupic’s Nine Black Robes takes us unsparingly through the most devastating and consequential period in modern Supreme Court history. Biskupic’s fact-rich, detailed reporting demands that we confront how drastically the Court, led by a relentlessly determined conservative super-majority, has aggressively reframed and diminished the boundaries of rights and protections that Americans have enjoyed for decades. And Biskupic’s sober review makes clear that the consequences of the “Trump effect” on our Court are far from over.” — Sherrilyn Ifill, Former President & Director-Counsel, NAACP Legal Defense Fund, Inc.

Joan Biskupic is CNN's Senior Supreme Court Analyst. Before joining CNN in 2017, she was an editor in charge for legal affairs at Reuters and was previously the Supreme Court correspondent for the Washington Post and for USA Today. Biskupic was a finalist for the Pulitzer Prize in explanatory journalism in 2015. In addition to her biography of John Roberts, The Chief: The Life and Turbulent Times of Chief Justice John Roberts, Biskupic is the author of books on Sandra Day O'Connor, Antonin Scalia, and Sonia Sotomayor. She also holds a law degree from Georgetown University.

Other Works by Joan Biskupic