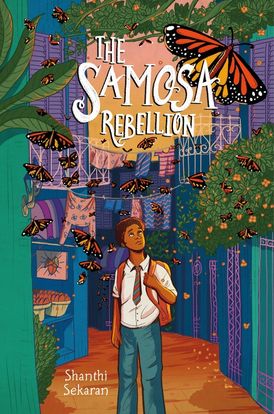 Critically acclaimed author Shanthi Sekaran makes her middle grade debut with this timely and stunning novel in which a young boy and his friends must rescue his grandmother from a relocation camp after their country’s descent into xenophobia. Perfect for fans of The Night Diary and Front Desk.

Before his grandmother moved from India to the island of Mariposa, Muki Krishnan’s life was good. But now? He has to share his bedroom with Paati, his grandmother, who snores like a bulldozer and wakes him up at dawn to do yoga.

Paati’s arrival coincides with even bigger changes in Mariposa. The president divides citizens into Butterflies—families who have lived in Mariposa for three generations—and Moths, who, like Muki’s family, are more recent immigrants. The changes are small at first. But then Muki and his friends find a camp being built to imprison Moths before sending them away. Soon after, his Paati is captured and taken there.

While devising Paati’s escape, Muki discovers that a secret rebellion is underway, and as he digs deeper, he realizes that rescuing Paati will be the fight of his life.

“Sekaran’s world-building is compelling and distinctive, never overtaken by the story’s clear message about intolerance. The character names (the president answers to 'Bambi'; Tinley’s dad is 'Doggy') bring a touch of the ridiculous to the book’s otherwise sober exploration of prejudice and authoritarianism; and Muki’s vivid enthusiasm makes him a compelling protagonist.” - Horn Book Magazine

"An effective novel-length parable that tracks how microaggressions mask, and then escalate into, political policy and how the fortunes of legal residents can turn on a dime... A useful reading prompt for classroom discussion." - Bulletin of the Center for Children’s Books

"The Samosa Rebellion is a fascinating journey which seamlessly makes inventive parallels to our current issues of immigration, racism, classism, and xenophobia. A thought-provoking, fast-paced, and heartfelt adventure!" - Veera Hiranandani, Newbery Honor–winning author of The Night Diary

“Sharp, incisive, and layered, The Samosa Rebellion is a deftly written, lovingly realized novel that is at a once page-turner and a call to action. Sekaran’s characters are warm and passionate and impossible not to root for, and their story is urgent and nuanced and relentlessly readable.” - Corey Ann Haydu, acclaimed author of One Jar of Magic

“The Samosa Rebellion is an extraordinary, thoroughly engrossing read. Warm and charming in its exploration of family and friendship, it’s also sharp and clear-eyed in its depiction of a country’s frightening slide toward an anti-immigrant nationalism.”  - Trenton Lee Stewart, New York Times bestselling author of the Mysterious Benedict Society series 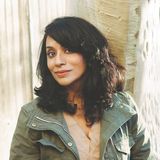 Shanthi Sekaran is a novelist and television writer who lives in Berkeley, California. Lucky Boy, her most recent book for adults, came out in 2017. The Samosa Rebellion is her first middle grade book. When she’s not writing, she plays soccer and the ukulele. She has two kids and a cat named Frog.

Other Works by Shanthi Sekaran