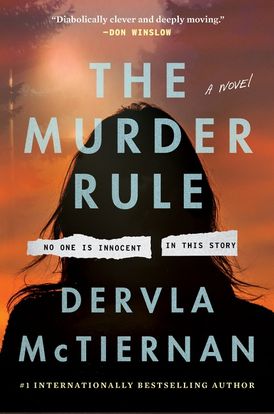 "Matters culminate in a courtroom fireworks display worthy of Perry Mason in his prime. The Murder Rule holds one’s interest from its cheeky opening pages through its final scene." —Wall Street Journal

For fans of the compulsive psychological suspense of Ruth Ware and Tana French, a mother daughter story—one running from a horrible truth, and the other fighting to reveal it—that twists and turns in shocking ways, from the internationally bestselling author of The Scholar and The Ruin.

Second Rule: Make them need you.

They think I’m a young, idealistic law student, that I’m passionate about reforming a corrupt and brutal system.

They think I’m working hard to impress them.

They think I’m here to save an innocent man on death row.

They're wrong. I’m going to bury him.

"Matters culminate in a courtroom fireworks display worthy of Perry Mason in his prime. The Murder Rule holds one’s interest from its cheeky opening pages through its final scene." — Wall Street Journal

"Excellent... McTiernan [is] an uncommonly fine mystery writer.... What a thrilling book this is." — New York Times Book Review on The Murder Rule

“Gripping and full of tension, with twist after unexpected twist. You won’t just read The Murder Rule, you’ll devour it.” —  Karin Slaughter, New York Times bestselling author of Pieces of Her

“Dervla McTiernan has become one of my favorite writers, and if you read The Murder Rule, she will quickly become one of yours. This book is diabolically clever, highly compelling, and deeply moving. I loved The Murder Rule and did not want it to end.” — Don Winslow, New York Times bestselling author of The Force and The Border

“Hannah’s considerable ruthlessness and determination make her one of the most memorable characters in current crime fiction.” — Los Angeles Review of Books on The Murder Rule

“Dervla McTiernan is an extraordinary writer, and The Murder Rule is a brilliant, breathtaking, and irresistible thriller with unforgettable characters and twists on top of twists.” — T. J. Newman, New York Times bestselling author of Falling

“Extraordinary. Haunting. An incredible thriller. I could not put this book down. Dervla McTiernan is a gifted writer with a very special way of telling a story. This is a heart-stopping roller coaster of a tale.” — Adrian McKinty, New York Times bestselling author of The Chain

“The Ruin is dark and compelling, with the satisfaction of a police procedural and the atmosphere of a gothic mystery. I was gripped by it, and by the complicated, resourceful characters of Aisling and Maude.” — Flynn Berry, author of Under the Harrow

"The best legal thriller I’ve read in years. Great writing, a gripping plot, intriguing characters … I read it in two sittings. She has a new fan!" — Sarah Pinborough, New York Times bestselling author of Behind Her Eyes

The Murder Rule is a masterclass in manipulation from an author who knows just how to pull the strings without revealing her (amply skilled) hand.... Abundant plot twists, ethical ambiguities, and legal loopholes all conspire to make a cunning and compulsively readable story in which justice is in the eye of the beholder.... Dervla McTiernan is a name to know. — CriminalElement.com

"I don’t think it’s an exaggeration to compare this to Grisham at his very best. The Murder Rule is utterly absorbing, entertaining and intriguing. I thoroughly enjoyed it." — Liz Nugent, author of Lying in Wait

"Fans of past and present storylines and legal thrillers should pick this one up." — Book Riot

"Filled to the brim with complicated characters." — San Francisco Book Review on The Murder Rule

"A page-burner... growing louder and closer and fiercer and more obsessive. On the cover of The Murder Rule it says, 'No one is innocent in this story.' And that will include you, the reader, as your buried deceits and treacheries both minor and major make ghostly appearances.... Don't miss this one." — Durango Telegraph

"This is good! I got nothing done for the last two days because I couldn’t put it down. Loved it. Really gripped." — Jane Fallon, author of Worst Idea Ever

"I absolutely devoured The Murder Rule in two days. It is one of those books that honestly keeps you turning the pages almost quicker than you can read them. The characters are excellently drawn and the plotting is pacy and intelligent. I totally enjoyed this gripping read." — Patricia Gibney, author of The Guilty Girl

"Clever and compelling, Dervla McTiernan has seamlessly switched from fast-paced police procedural to original and suspenseful legal drama without missing a beat." — Sarah Bailey, author of The Dark Lake and The Safe House

"Thrilling, compelling and packed with twists, this is McTiernan at a whole other level. I can’t get enough of this author." — Jo Spain, author of The Perfect Lie

"Thoroughly addictive … an absolute must read." — Anna Downes, author of The Safe Place and The Shadow House

"It’s a tough call when she has consistently set the bar so high, but The Murder Rule by Dervla McTiernan may be her best yet. Taut, gripping and beautifully written, it also packs a devastating twist." — Simon Lelic, author of The Search Party and Liar's Room

"With a refreshing willingness to wade into uncomfortable grey areas, Dervla McTiernan’s exceptional The Murder Rule has nailed something fundamentally true about being human; that none of us are quite who we pretend to be and that being the hero in your own story doesn’t stop you from being the villain in someone else’s. Grabs you from the first page and refuses to let go. Brilliant." — Gabriel Bergmoser, author of The Hunted and The Inheritance

"I was absolutely hooked on The Murder Rule! Every twist and turn had me even more intrigued. What a rollercoaster – I raced through every page, desperate for the next reveal. A fascinating story about innocence and justice, love and family." — Petronella McGovern, author of Six Minutes

“For fans of the compulsive psychological suspense of Ruth Ware.” — Booklist on The Murder Rule

“Dervla McTiernan’s deliciously complicated police procedural The Ruin begins when a young man jumps to his death from a bridge in Galway, Ireland—or does he? His girlfriend doesn’t think Jack took his life, and neither does the detective who knew him from another case twenty years earlier. But the harder they dig for answers, the farther the truth recedes, and the more complicated and dangerous their investigation becomes. Fans of Tana French will love McTiernan’s expertly plotted, complex web of secrets that refuse to stay hidden.” — Karen Dionne, author of The Marsh King’s Daughter, on The Ruin

“Powerful . . . McTiernan neatly ties [the threads of the novel] all together in the suspenseful conclusion. McTiernan, born in Ireland but now living in Australia, is a writer to watch.” — Publishers Weekly (starred review) on The Ruin

“Compelling, unexpected twists and a hold-your breath standoff . . . Hand this one to readers of Tana French and to police-procedural fans.”  — Booklist on The Ruin

“There are shades of Ross Macdonald in McTiernan’s sophomore novel: an austere patriarch, successive generations of a family manifesting the same flawed gene, a self-crippling lust for power, money, and status. . . . A complex, densely plotted murder investigation.” — The Irish Times on The Scholar

“[Readers] will be happy to discover this up-and-coming author.”

International #1 bestseller Dervla McTiernan’s first two novels, The Rúin and The Scholar, were critically acclaimed around the world. Dervla has won multiple prizes, including a Ned Kelly Award, Davitt Awards, a Barry Award and an International Thriller Writers Award, and has been shortlisted for numerous others. Dervla’s third book, The Good Turn, went straight to #1 in the bestseller charts, confirming her place as one of Australia’s best and most popular crime writers.

Other Works by Dervla McTiernan