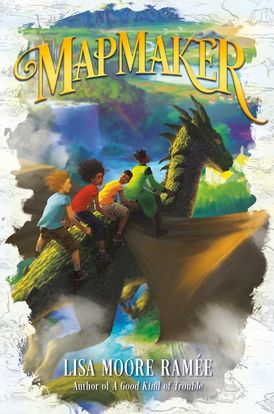 From Lisa Moore Ramée, author of the Walter Honor Award–winning A Good Kind of Trouble, comes her debut middle grade fantasy—an absorbing, imaginative adventure about a Black boy who has the magical ability to bring maps to life. Perfect for fans of Tristan Strong Punches a Hole in the Sky and A Tale of Magic.

When Walt and his family relocate to Blackbird Bay, Walt thinks it’s the most boring place on earth. While his twin sister, Van, likes to spend her time skateboarding, Walt prefers to hide out in his room and work on his beloved map world, Djaruba. But shortly after their arrival, Walt discovers something extraordinary: He has the ability to make maps come to life.

Suddenly his new hometown doesn’t seem so boring after all. And when a magical heirloom leaves Walt, his new friend Dylan, and Van stranded in the fantastical world that Walt created, he’ll need to harness his new power to get them home.

But things are changing. People have gone missing, and it’s clear that a malevolent rival to the kingdom—a fellow mapmaker—has nefarious plans for Walt. If he’s not stopped soon, Djaruba could become nothing but a shadow of itself or, worse, gone forever. And if a mapmaker can destroy one world, could Earth be next?

“In her first fantasy for young readers, Lisa Moore Ramée puts her distinctively authentic tween characters into a world where magic glimmers underneath the surface, creating an inventive fantastical adventure that explores the many ways to be tough and how powerful having a big imagination can be.” — Anne Ursu, author of The Troubled Girls of Dragomir Academy

PRAISE FOR SOMETHING TO SAY: “A timely, entertaining, unforgettable story about family, friendship, and finding your voice.” — Kirkus Reviews (starred review)

"This is a compelling story about friendship, fighting for what you believe in, and finding your voice. A first purchase for middle grade collections.”  — School Library Journal (starred review)

PRAISE FOR A GOOD KIND OF TROUBLE: “Full of heart and truth, A Good Kind of Trouble has all of the making to be this generation’s Roll of Thunder, Hear My Cry. Much like Cassie Logan, Shayla’s experiences, pitfalls, and triumphs will inspire young people for years to come. It is a well-written page turner with a voice that stays with you long after you put the book down.” — Angie Thomas, #1 New York Times bestselling author of The Hate U Give

“Shayla navigates the world of middle school and the troubled world beyond with wit and endless heart. A timely, funny, and unforgettable debut about friendship, facing your fears, and standing up for what’s right.” — Kirkus Reviews (starred review)

“Reminiscent in writing style to works by Lauren Myracle and Jason Reynolds, this novel [shows] Shayla’s typical middle school problems, then switches to the very specific problems she faces as a young black girl in America…[For] middle grade readers who aren’t yet ready for Thomas’s The Hate U Give.” — School Library Journal (starred review)

Lisa Moore Ramée was born and raised in Los Angeles, and she now lives in the Bay Area of California, with her husband, two kids, and two obnoxious cats. She is the author of A Good Kind of Trouble and Something to Say. You can visit her online at www.lisamooreramee.com.

Other Works by Lisa Moore Ramée

A Good Kind of Trouble