In the Garden of the Righteous 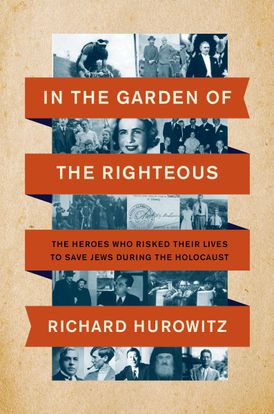 In the Garden of the Righteous

“In the Garden of the Righteous brilliantly describes how in the midst of the brutality of the Holocaust and the collaboration, acquiescence and passivity of millions, there were people who risked their lives to save others out of a sense of shared humanity. This book is more timely than ever.”—Stuart E. Eizenstat, author of Imperfect Justice: Looted Assets, Slave Labor, and the Unfinished Business of World War II

These powerfully illuminating and inspiring profiles pay tribute to the incredible deeds of the Righteous Among the Nations, little-known heroes who saved countless lives during the Holocaust.

Less than a century ago, the Second World War took the lives of more than fifty million people; more than six million of them were systematically exterminated through crimes of such enormity that a new name to describe the horror was coined: the Holocaust. Yet amid such darkness, there were glimmers of light—courageous individuals who risked everything to save those hunted by the Nazis. Today, as bigotry and intolerance and the threats of fascism and authoritarianism are ascendent once again, these heroes’ little-known stories—among the most remarkable in human history—resonate powerfully. Yad Vashem, the Holocaust Memorial in Jerusalem, has recognized more than 27,000 individuals as “Righteous Among the Nations”—non-Jewish people such as Raoul Wallenberg and Oskar Schindler who risked their lives to save their persecuted neighbors.

In the Garden of the Righteous chronicles extraordinary acts at a time when the moral choices were stark, the threat immense, and the passive apathy of millions predominated. Deeply researched and astonishingly moving, it focuses on ten remarkable stories, including that of the circus ringmaster Adolf Althoff and his wife Maria, the Portuguese diplomat Aristides de Sousa Mendes, the Italian cycling champion Gino Bartali, the Polish social worker Irena Sendler, and the Japanese spy Chinue Sugihara, who provided hiding places, participated in underground networks, refused to betray their neighbors, and secured safe passage. They repeatedly defied authorities and risked their lives, their livelihoods, and their families to save the helpless and the persecuted. In the Garden of the Righteous is a testament to their kindness and courage.

“In a time when our humanity is challenged by new heights of instability and new waves of antisemitism and ethnic hatred, it is an understatement to say this book is timely. A fresh, engrossing contribution to the literature on the Holocaust, focusing on heroics rather than despair.”  — Kirkus Reviews (starred review)

“Hurowitz debuts with an inspiring group portrait of Holocaust ‘rescuers’ whose stories are ‘too little told and too little known’…This well-told history is a moving reminder that ‘we can all contribute to the project of improving the world.’” — Publishers Weekly

"Richard Hurowitz has written a powerful, moving book about ten heroic rescues of Jews from the clutches of the Nazis. In the Garden of the Righteous brilliantly describes how in the midst of the brutality of the Holocaust and the collaboration, acquiescence and passivity of millions, there were people who risked their lives to save others out of a sense of shared humanity. This book is more timely than ever." — Stuart E. Eizenstat, author of Imperfect Justice: Looted Assets, Slave Labor, and the Unfinished Business of World War II

“With great precision, heartbreaking empathy, and a flair for the dramatic, Richard Hurowitz uncovers ten extraordinary instances during World War II when a person chose to oppose the seemingly omnipresent darkness. In the Garden of the Righteous is a treasure of a book.” — Nathaniel Philbrick, National Book Award-winning author of In the Heart of the Sea and Travels with George

"Richard Hurowitz’s heroes have little in common: They are German circus ringmasters, Greek archbishops, two-time Italian Tour de France winners, Polish doctors' daughters, Japanese diplomats. What joins them is the refusal to surrender their consciences. Under Nazi eyes, all sheltered, supported, or rescued Jews, often at tremendous personal expense. Each believed—as the Portuguese consul who violated order after order to sign travel visas through the summer of 1940 put it—that we are all refugees. And each shines, in these stirring, spirited pages, like a beacon amid darkness." — Stacy Schiff, Pulitzer Prize-winning author of The Witches and The Revolutionary

“In the Garden of the Righteous is a beautiful tribute, an inspirational message and an awesome lesson that people who care, who empathize, who respect ‘the other’ can make a huge difference—they can save lives in the most difficult and horrific conditions. Richard Hurowitz makes these heroes come alive as real people. A must read in today’s difficult days.”   — Abraham H. Foxman, former national director of the Anti-Defamation League

“In the Garden of the Righteous compellingly details the singular actions of the righteous during one of humanity's darkest hours, the Holocaust. In an age of rising authoritarianism around the globe, these remarkable profiles of heroism serve as a much needed reminder that evil prevails when the good do nothing.” — Elliot Ackerman, author of The Fifth Act: America’s End in Afghanistan

"A much needed account of those who acted with a clear moral compass during the most devastating moments of the twentieth century. Hurowitz's meticulously researched text honors those unique individuals who had, in the midst of the Holocaust, the will to see and the will to act and, in turn, saved lives. This thoughtful book reminds us all that individuals can change the course of history and it is incumbent on all citizens to take on the moral responsibility to care for each other. . . . This book is deeply needed today." — Bernard-Henri Lévy, philosopher, author, and filmmaker

“Richard Hurowitz offers us the gift we need in these trying times, a well-researched and gracefully written history of the unjustly forgotten heroes and heroines of World War II who, honor-bound, risked their own lives to save the lives of others from the Nazi death machines.” — David Nasaw, New York Times-bestselling author of The Patriarch and Andrew Carnegie

“In the Garden of the Righteous is a gift to readers, revealing poignant and inspiring stories of heroism amid horror. Richard Hurowitz's impeccable research and original reporting marks the book as an important addition to Holocaust history and personal bookshelves alike.” — Matthew Pearl, author of The Taking of Jemima Boone

Other Works by Richard Hurowitz