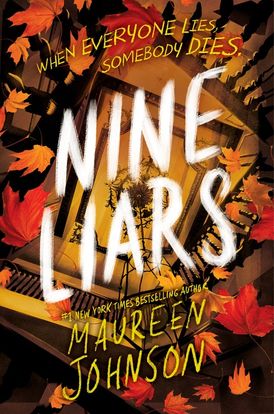 Stevie Bell solved the case of Truly Devious, and now she’s taking her detecting skills abroad when she becomes embroiled in a mystery from 1990s England. Another pulse-pounding and laugh-out-loud stand-alone mystery from New York Times bestselling author Maureen Johnson.

Senior year at Ellingham Academy for Stevie Bell isn’t going well. Her boyfriend, David, is studying in London. Her friends are obsessed with college applications. With the cold case of the century solved, Stevie is adrift. There is nothing to distract her from the questions pinging around her brain—questions about college, love, and life in general.

Relief comes when David invites Stevie and her friends to join him for study abroad, and his new friend Izzy introduces her to a double-murder cold case. In 1995, nine friends from Cambridge University went to a country house and played a drunken game of hide-and-seek. Two were found in the woodshed the next day, murdered with an ax.

The case was assumed to be a burglary gone wrong, but one of the remaining seven saw something she can’t explain. This was no break-in. Someone’s lying about what happened in the woodshed.

"The exploration of the importance of friendship adds emotional vulnerability to this book, which has a well-developed sense of place and features the series’ signature humor and layered mystery elements. Immersive and genre-savvy." — Kirkus Reviews (starred review)

"A scintillating mystery. Johnson delivers a meticulously crafted fair-play mystery that gratifies as a standalone while also forwarding the richly textured characters’ arcs, a treat for fans of the series. Distinctly written flashbacks to 1995 pepper the present-day narrative, creating resonance and investing readers in Stevie’s case. Stevie cues as white; the supporting cast is intersectionally diverse." — Publishers Weekly (starred review)

"Now that we've read the fifth novel, we're tempted to buy the rest of the series. We had to admit it: we had not idea who the killer was until Stevie figured it out. The author gives us just enough information to draw conclusions and multiple plot twists take us for a spin. Even when we thought we know what to expect, we didn't." — The Honey Pop

"While fans of Johnson's Truly Devious trilogy (and there are many) will undoubtedly be eager for this spinoff, Stevie's summertime exploit both stands alone and adds compelling layers to the established characters—an impressive feat. HIGH-DEMAND BACKSTORY: Johnson builds on the success of her NYT-bestselling Truly Devious series with this standalone spinoff that blends mystery and horror conventions in a summer-camp setting—perfectly timed for summertime campfires."  — Booklist (starred review)

"Johnson gleefully takes a stab at the slasher movie trope by sending her teen detective on a cold case at a summer camp. This satisfying standalone mystery will delight fans of teen horror flicks and true-crime documentaries, as well as those who prefer their mysteries wrapped up after one volume. Here’s hoping this highly entertaining volume isn’t the last we hear from Stevie Bell."  — Horn Book Magazine

"The Box in the Woods is an excellent, cleverly braided, no punches pulled story leavened with humor. It’s worth reading for the great rapport between the fully-fleshed characters of Stevie, queer black crafts-mad Janelle, and the sardonic uber-nerd Nate alone. A great summer read!”  — AuthorLink

"If the beginning of the storyline reads like a Scooby Doo script it’s done in honest homage, and is just as much fun, if admittedly darker and more complex than anything Shaggy and team would have tackled. That there’s also a deep emotional current running through the book as Bell’s finely developed sense of empathy for the friends of the dead is revealed sets the story apart. A challenging and satisfying mystery, this is one you’ll be shaking the sand out of come September."  — Mountain Times

“Jumping between past and present, Johnson’s novel is deliciously atmospheric, with a sprawling cast of complex suspects/potential victims, surprising twists, and a dash of romance. As in her Shades of London books, Johnson remains a master at combining jittery tension with sharp, laugh-out-loud observations.”  — Publishers Weekly (starred review)

“Remember the first time reading Harry Potter and knowing it was something special? There’s that same sense of magic in the introduction of teen Sherlock-in-training Stevie Bell. Parallel mysteries unfold with cleverly written dialogue, page-turning brilliance and a young sleuth just as captivating as Hercule Poirot.”  — USA Today (four stars)

“A suspenseful, attention-grabbing mystery with no clear solution. The versatile Johnson is no stranger to suspense, and this twisty thriller will leave plenty of readers anxious for more.”  — Booklist

Praise for THE VANISHING STAIR: “In this second . . . installment, Johnson gives and she takes away: a few major mysteries are satisfying solved, but other long-standing riddles remain tantalizingly indecipherable, and several new ones come into play by the enigmatic end. Readers, hang tight: there’s one more round to come, and if the signs are right, it’ll be to die for.”  — Booklist

"Ramps up the intrigue. Throughout this volume, Johnson's compelling would-be Sherlock proves to be as bad at personal relationships as she is adept at solving mysteries. Teen angst soars as Johnson delightfully conjures up more nefarious deeds from the mountain mist."  — Kirkus Reviews (starred review)

“Take it from the world’s most impatient reader: If the Truly Devious series is basically one long mystery book, The Vanishing Stair is a middle part so enjoyable you won’t even want to skip to the end.”  — Entertainment Weekly

“Waiting for the next installment of Maureen Johnson’s Agatha Christie-Sherlock Holmes-classic mystery homage series was torture, but The Vanishing Stair is oh so worth it.”  — Bustle

"In this hotly anticipated trilogy finale, Johnson pulls out all the stops, filling the thrillingly nimble narrative with classic mystery conventions. A striking foray into an examination of what mysteries can ever truly be solved, and a satisfying send-off for a series that will be missed."  — Booklist

“Maureen Johnson brings her delectable ‘Truly Devious’ murder mystery trilogy to a thrilling conclusion, neatly tying together her dueling narrative threads, one set in 1936 and the other in the present day, with an action-packed finale during a blizzard at Ellingham Academy in the mountains of Vermont.”  — Buffalo News

"This will be essential reading for the many fans of the first two books. This trilogy ender is fun, satisfying, and a genuine treat for teens and adult mystery fans."  — School Library Journal

“Readers will be eager to know the novel’s conclusion but will never want the book to end. Replete with intrigue, thoughtfulness, and depth, The Hand on the Wall is a mystery of the moment and for the ages.”  — San Francisco Book Review

"This inclusive, inventive, and vastly entertaining series has been a boon to YA literature. As a layered, complex character who solves crime while also battling anxiety, Stevie Bell reads like the redoubtable love child of Jessica Fletcher and Adrian Monk. There will hopefully be more Stevie Bell mysteries to come."  — Horn Book Magazine