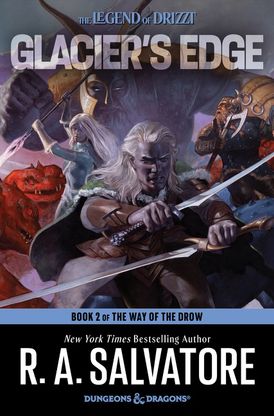 From New York Times bestselling author R. A. Salvatore comes the follow-up to Starlight Enclave and thrilling second novel in his newest trilogy, The Way of the Drow, expanding the Forgotten Realms through the adventures of Drizzt, Catti-brie, Jarlaxle, Artemis Entreri, and Zaknefein…and a society of drow unlike one any elf from Menzoberranzan could possibly imagine.

There’s a lot that Jarlaxle doesn’t know: is he the lone survivor of the raid on the slaad fortress, can he even find a way to get out, and beyond his immediate predicament, could he possibly escape the ice caverns and get help for his friends?

However, what Jarlaxle does know is that if he plans to come back—if Catti-brie, Entreri, and Zaknafein are to have any hope of surviving—he’s going to have to bring back far more firepower. An army of aevendrow seems unlikely, so he must go home and pull together a team with great skill and unimaginable power.

But how will he get home? Will such a collection of warriors and mages come to his aid? And even if he manages all that, will it be enough? For Jarlaxle has seen the slaadi’s power and their god in a most personal and terrifying way.

Trapped in the ice while the world is on fire, Jarlaxle is in a race against time—and burdened with a magical secret—to save a peaceful city and his companions.

“The exhilarating conclusion to Salvatore’s Generations trilogy (after Boundless) illustrates the power of family, both born and chosen … Amid epic sword and sorcery clashes, Salvatore makes a powerful case for love and compassion conquering even the strongest of evils. Fans will be sad to see this fantastic series end.”  — Publishers Weekly (starred review) on Relentless

The newest evolution of a narrative that’s grown and developed for nearly three decades...a payoff for all that preceded it.”   — NerdsonEarth.com on Relentless