Masters of the Lost Land 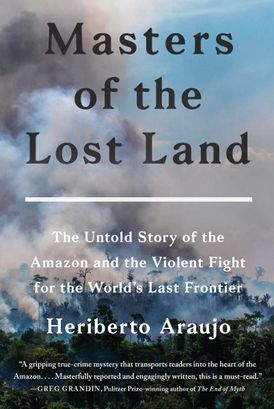 Masters of the Lost Land

In the tradition of Killers of a Flower Moon, a haunting murder-mystery that reveals one of the great crimes of our time: the ruthless destruction of the Amazon rainforest—and anyone who stands in the way.

The city of Rondon do Pará, a remote but fast-growing outpost deep in the heart of the Amazon, lived for decades under the control of Josélio de Barros, one of Brazil's most notorious land barons. Josélio had cut a grisly path to success: he arrived in the jungle with a shady past, quickly making a name for himself as an invincible thug who grabbed up massive tracts of public land—razing and burning the jungle in the process—falsified private title deeds, summarily executed family farmers who refused to sell their plots, and kept migrant workers in conditions of modern-day slavery. The government's support of these practices has led directly to the devastating superfires we've seen in the past few years—extracting all value to be gotten from the land at any cost.

Enter José Dutra da Costa (nicknamed Dezinho), the leader of Rondon's small but robust farm workers' union, who had been fighting back against these land grabs, ecological destruction, and blatant human rights abuses for decades. When Dezinho was killed in a shocking cold-blooded assassination, some 2,000 people turned out for his funeral, and the city of Rondon held its breath. Would Josélio, whom everyone knew had ordered the hit, finally be brought to account? Or would authorities look the other way, as they had hundreds of times before?

Dezinho's widow, Dona Joelma, was not about to let that happen. After his murder, she stepped into the spotlight, orchestrating a huge push to bring national media attention to the injustice happening in the Amazon. Against great odds, and at extreme personal risk, she succeeded in expanding the campaign Dezinho had started, and since his death, has helped thousands of people through her agrarian reform and redistribution efforts. Legally, she threw her weight behind the murder charges against Josélio, using her deep network of loyal rural workers to deliver a key witness that cracked the case wide open.

Set against the backdrop of President Bolsonaro's devastating cuts to environmental protections, Brazil's rapidly changing place in the geopolitical spectrum, and the Amazon's crucial role in climate change, this book promises a gripping read that's also a timely story of how people are fighting for—and winning—justice for their futures and for the future of one of the last wild places on earth.

“A gripping true crime mystery that transports readers into the heart of the Amazon to witness the human toll of its destruction and the incredible will of its people to fight for the future of this unique place – and the planet. Masterfully reported and engagingly written, this is a must-read.”  — Greg Grandin, Pulitzer Prize-winning author of The End of Myth

"Intriguing. ... A harrowing and deeply researched report from the front lines of the battle for the Amazon." — Publishers Weekly

"Excellent. ... An arresting examination of the history of extreme deforestation and violence in the Brazilian Amazon." — Kirkus Reviews

"With a journalist’s insight and a scholar’s scrutiny, Heriberto Araujo tells the timeless story of dominance, displacement, murder and social injustice that drive large-scale environmental destruction. Masters of the Lost Land documents an Amazonian version of one culture suppressing another through violence, force, and corruption. On the surface, Araujo’s case study offers more understanding of the past than hope for the future, yet its central heroine provides the kind of inspiration needed to break the cycle of frontier corruption and destruction." — Roman Dial, bestselling author of The Adventurer's Son

"Masters of the Lost Land is journalism at its absolute best, made even more impressive when one considers the obstacles, obfuscation and threats so often encountered there when trying to ferret out the truth. I’ve often suspected that the modern history of the Amazon parallels the 19th- century cattle wars and gold rushes of the American West: it has, but in overdrive. This is an essential book, and my only criticism is selfish – that it wasn’t around earlier (to make my own writing easier)." — Joe Jackson, author of The Thief at the End of the World: Rubber, Power, and the Seeds of Empire

"Heriberto Araujo, drawing on his years of research, has written an essential journalistic account of the murder, mayhem and mind-boggling corruption surrounding the assault on the Amazon. It is a compelling account of an ongoing natural catastrophe." — Dr. Gary Sick, Columbia University, Board Member of Human Rights Watch (emeritus)

“A tour de force. Araujo's masterful reporting from the frontlines in the war for the world's most important tropical biome should be required reading for policy makers, and for anyone who cares about the fight for social and environmental justice for Amazonia's forest peoples.” — Dr. Jeremy M. Campbell, author of Conjuring Property: Speculation and Environmental Futures in the Brazilian Amazon

"Heriberto Araujo does a significant service to Amazonia by providing a look into the social hell that accompanies the destruction of the Amazon rainforest. ... No one can read this account without coming to the conclusion that we must prevent such events from continuing. Perhaps this book will help achieve this end, and for this we owe thanks to Heriberto Araujo and to all those who risked their lives to tell their experiences to him." — Philip M. Fearnside, research professor at the National Institute for Research in Amazonia (INPA) in Manaus, Brazil