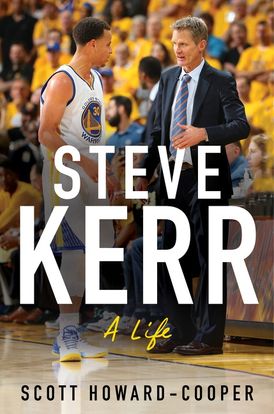 The definitive biography of Steve Kerr, the championship-winning basketball player and head coach of the record-breaking Golden State Warriors

Few individuals have had a career as storied, and improbable, as Steve Kerr. He has won eight NBA titles—five as a player and three as a coach—for three different franchises. He played alongside the best players of a generation, from Michael Jordan to Shaquille O’Neal to Tim Duncan, and learned the craft of basketball under four legendary coaches. He was an integral part of two famed NBA dynasties. Perhaps no other figure in basketball history has had a hand in such greatness.

In Steve Kerr, award-winning sports journalist Scott Howard-Cooper uncovers the fascinating life story of a basketball legend. Kerr did not follow a traditional path to the NBA. He was born in Beirut to two academics and split his childhood between California and the Middle East. Though he was an impressive shooter, the undersized Kerr garnered almost no attention from major college programs, managing only at the last moment to snag the final scholarship at the University of Arizona. Then, during his freshman season at Arizona, tragedy struck. His father, Malcolm, then the president of the American University of Beirut, was assassinated in Lebanon by terrorists. Forged by the crucible of this family saga, Steve went on to chart an unparalleled life in basketball, on the court and on the sidelines.

The only coach other than Red Auerbach to lead a team to the Finals five consecutive seasons, Kerr seems destined for the Basketball Hall of Fame. Steve Kerr is his incredible story, offering insights into the man and what it takes to be—and make—a champion. Drawing upon Scott Howard-Cooper’s years covering Warriors, deep archival research, and original interviews with more than one hundred of the central characters in Kerr’s life, this is basketball biography at its finest.

"If Lou Gehrig were here, he might agree Steve Kerr is the luckiest man alive, as Steve often says. Because Steve's is a heck of a story and you could write a book about it. Oh, right. Scott Howard-Cooper did. And it's well told through Steve's personal triumphs and tragedy and triumph and triumph and triumph, all achieved and experienced with endearing humor and humility. You can't believe how he got there until you know how he did. And then you appreciate Steve even more and Scott for bringing the story to us." — SAM SMITH, New York Times Bestselling Author of The Jordan Rules

“The Kerr story is an amazing one, and Scott Howard-Cooper has given us a fascinating look at a fascinating life. Kerr takes such a mirthful, ironic approach, filled with self deprecation, to so much of the business of competing, yet make no mistake. Underneath all of that is a hard-edged, driven competitor, burnished in many cases by disappointment and sorrow, yet possessed of immense wisdom and insight into the emotional lives of NBA players and coaches. Scott Howard-Cooper has captured brilliantly the mystery of all that. I must say I'm quite envious.”  — ROLAND LAZENBY, author of Michael Jordan: The Life

"Steve Kerr has lived an amazing life, with moments of great elation and immense pain. Scott Howard-Cooper has put together an important, well-researched book that reflects all the ups and downs of Kerr's journey through basketball and beyond, with keen insights as to what makes him a successful coach and a deeply admirable human being. You don't have to be a Warriors fan, or even a basketball fan, to enjoy this book." — SETH DAVIS, basketball reporter and author, CBS Sports and The Athletic

"A compelling account that demands a place in any sports collection." — Booklist

"[A] highly entertaining look at one of basketball’s most interesting people." — Plainview Herald

"One of the few writers with the combination of juice and talent to make a project like this work. ... A comprehensive look at one of the most interesting men in professional sports today. ... A breezy, fast-moving read that—much like its titular namesake—makes the majority of its shots." — The Maine Edge

Scott Howard-Cooper has covered professional and college sports since the 1980s for some of the most prominent outlets in the country, including the Los Angeles Times, ESPN.com, NBA.com and NBA TV, SportsIllustrated.com and the Sacramento Bee, among others. His work has earned multiple national awards from the Associated Press Sports Editors and the Professional Basketball Writers Assn. for projects, game coverage, features and columns. He graduated from USC with a degree in Political Science and lives in Northern California.

Other Works by Scott Howard-Cooper