When the Heavens Went on Sale

The Misfits and Geniuses Racing to Put Space Within Reach 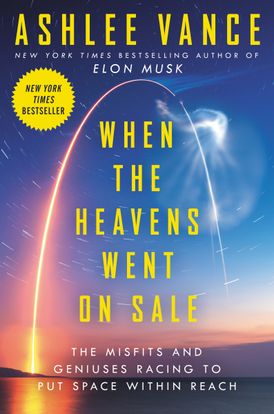 When the Heavens Went on Sale

The Misfits and Geniuses Racing to Put Space Within Reach

A momentous look at the private companies building a revolutionary new economy in space, from the New York Times bestselling author of Elon Musk

In When the Heavens Went on Sale, Ashlee Vance illuminates our future and unveils the next big technology story of our time: welcome to the Wild West of aerospace engineering and its unprecedented impact on our lives.

With the launch of SpaceX’s Falcon 1 rocket in 2008, Silicon Valley began to realize that the universe itself was open for business. Now, Vance tells the remarkable, unfolding story of this frenzied intergalactic land grab by following four pioneering companies—Astra, Firefly, Planet Labs, and Rocket Lab—as they build new space systems and attempt to launch rockets and satellites into orbit by the thousands.

With the public fixated on the space tourism being driven by the likes of Elon Musk, Jeff Bezos, and Richard Branson, these new, scrappy companies arrived with a different set of goals: to make rocket and satellite launches fast and cheap, thereby opening Earth’s lower orbit for business. Vance has had a front-row seat and singular access to this peculiar and unprecedented moment in history, and he chronicles it all in full color: the top-secret launch locations, communes, gun-toting bodyguards, drugs, espionage investigations, and multimillionaires guzzling booze to dull the pain as their fortunes disappear.

Through immersive and intimate reporting, When the Heavens Went on Sale reveals the spectacular chaos of the new business of space, and what happens when the idealistic, ambitious minds of Silicon Valley turn their unbridled vision toward the limitless expanse of the stars. This is the tale of technology’s most pressing and controversial revolution, as told through fascinating characters chasing unimaginable stakes in the race to space.

“The frenzied race by stargazing entrepreneurs to build a new economy in space is one of the most exciting tales of our time. Ashlee Vance, with his immersive reporting and exuberant writing, has captured the ambition and idealism of the colorful characters who are not only transforming our world but our heavens. It’s the next tech frontier, and Vance turns it into a thriller.” — Walter Isaacson, bestselling author of Steve Jobs and The Code Breaker

“A new testament for New Space, and an eloquent, expertly-reported ode to the swaggering geniuses who are opening the final frontier.” — Brad Stone, bestselling author of The Everything Store and Amazon Unbound

“Vance has delivered that rare book that educates and entertains while opening the reader up to a brand-new universe of wonderful characters and ideas. It's non-fiction that reads like a novel.” — Andy Weir, New York Times bestselling author of The Martian and Project Hail Mary

“Through incisive reporting and colorful prose, Ashlee Vance takes us on a thrilling ride to the outer limits of human achievement.” — Sheelah Kolhatkar, New Yorker staff writer and bestselling author of Black Edge

"[An] energetic account...[Vance] ably captures 'the spectacular madness of it all.' With enthusiasm and solid research, this book is an entertaining, informative look at cutting-edge technology." — Kirkus

Ashlee Vance is the New York Times bestselling author of Elon Musk and a feature writer at Bloomberg Businessweek. He's also the host of Hello World, a travel show that centers on inventors and scientists all over the planet. Previously, he worked as a reporter for The New York Times, The Economist, and The Register.

Other Works by Ashlee Vance