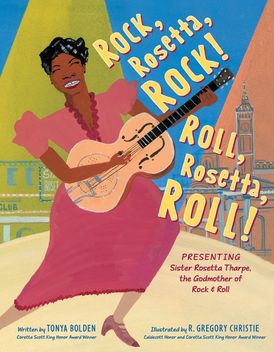 "A profile as bold and vivacious as the singer herself." —Kirkus (starred review)

Perfect for fans of Trombone Shorty and Ada’s Violin!

Award-winning author Tonya Bolden and acclaimed illustrator R. Gregory Christie deliver an inspiring true story about the life, career, and impact of 20th-century blues and gospel singer Sister Rosetta Tharpe, who was a trailblazer for rock-and-roll. Includes a timeline of Sister Rosetta Tharpe’s life, author’s note, and a list of sources.

Before there was Elvis, Chuck Berry, Little Richard, and Johnny Cash, there was Sister Rosetta Tharpe.

The godmother of rock & roll started as a little girl from Arkansas with music in her air, in her hair, in her bones, wiggling her toes. With a big guitar in hand and a big voice in her soul, she grew into a rock & roll trailblazer in a time when women were rarely seen rocking out. Her guitar picking was like nobody else’s!

“A profile as bold and vivacious as the singer herself.” — Kirkus Reviews (starred review)

Tonya Bolden’s books have earned much praise and numerous starred reviews. Her work has been recognized with the NCTE Orbis Pictus Award for Outstanding Nonfiction for Children and the Carter G. Woodson Book Award and listed as a CBC/NCSS Notable Social Studies Trade Book for Young People. She is also the recipient of the Children’s Book Guild of Washington, DC’s Nonfiction Award for her body of work. Her Maritcha: A Nineteenth-Century American Girl was a Coretta Scott King Author Honor book. Visit her website at www.tonyaboldenbooks.com.

Other Works by Tonya Bolden

R. Gregory Christie is the Caldecott Honor-winning illustrator of Freedom in Congo Square, as well as a five-time recipient of the Coretta Scott King Honor Illustrator Award and a three-time recipient of the New York Times Ten Best Illustrated Children’s Books of the Year award. He’s also a recipient of the NAACP’s Image Award, the Boston Globe-Horn Book Award, and the American Library Association’s Theodor Seuss Geisel Award for illustration. He also illustrated the 2013 Kwanzaa stamp for the United States Postal Service. He lives in Georgia. Visit Gregory’s website at www.gas-art.com

Other Works by R. Gregory Christie