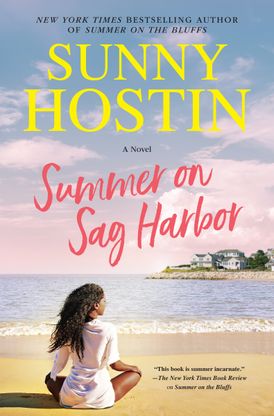 Following her New York Times bestseller Summer on the Bluffs, The View cohost and three-time Emmy Award winner Sunny Hostin spirits readers away to the warm beaches of Sag Harbor for the compelling second novel in her acclaimed Summer series.

In a hidden enclave in Sag Harbor, affectionately known as SANS—Sag Harbor Hills, Azurest, and Nineveh—there’s a close-knit community of African American elites who escape the city and enjoy the beautiful warm weather and beaches at their vacation homes. Since the 1930s, very few have known about this part of the Hamptons on Long Island, and the residents like it that way.

That is, until real estate developers discover the hidden gem. And now, the residents must fight for the soul of SANS.

Against the odds, Olivia Jones has blazed her own enviable career path and built her name in the finance world. But hidden behind the veneer of her success, there is a gaping hole. Mourning both the loss and the betrayal of Omar, a surrogate father to her and her two godsisters, Olivia is driven to solve the mystery of what happened to her biological father, a police officer unjustly killed when she was a little girl.

Untethered from her life in New York City, Olivia moves to a summer home in Sag Harbor and begins forging a new community out in SANS. Friendships blossom with Kara, an ambitious art curator; and Whitney, the wife of an ex-basketball player and current president of the Sag Harbor Homeowners Association; and a sexy new neighbor and single father, Garrett, who makes her reconsider her engagement with Anderson. She also takes to a kind, older gentleman named Mr. Whittingham, but soon discovers he too is not without his own troubles.

As the summer stretches on, each relationship teaches her more about who she really is. Though not without cost, Olivia’s search for her authentic identity in the secret history of her family of origin and her fight to preserve her new Black utopia, will lead her to redefine the meaning of love, friendship, community, and family—and restore her faith in herself, her relationships, and her chosen path.

“Hostin’s debut novel is aspirational escapism at its best, balancing an idyllic setting and lush, evocative language with emotional heft and adroit social commentary… Hostin’s story is a vast, intricate and ultimately rewarding one about love, family and self-fulfillment... In short, this book is summer incarnate.” — New York Times Book Review on Summer on the Bluffs

“A complicated, memorable tale of family, allegiances, secrets and summertime.” — Good Morning America on Summer on the Bluffs

“The Emmy Award–winning lawyer and journalist invites readers to the exclusive Black beach community of Oak Bluffs, Martha’s Vineyard, where the money is old, the secrets are deadly, and summer is more of a sport than a season…Think The Undoing with a hint of melanin, where everyone’s wearing $300 sandals.” — Essence on Summer on the Bluffs

“The highly anticipated summer must-read from the talented co-host of The View is finally here… No one, including the reader, is prepared for the feelings and secrets exchanged in this novel about love, family, and the courage to make the hardest of decisions.” — Shondaland on Summer on the Bluffs

“Bestselling author and The View cohost Sunny Hostin has penned the ultimate beach read in Summer on the Bluffs.” — Popsugar

“This glorious piece of summer fiction takes us to Oak Bluffs, a slice of the island that’s been home to the Black community elite for summers since the 1600s. Come for the ethereal setting and beautifully drawn characters, stay for the family dynamics, personal secrets and wisdom revealed.” — Boston Herald

“Emmy-winning co-host of The View, Sunny Hostin invites readers to Martha’s Vineyard in her fiction debut…what follows is a summer full of secrets that puts family ties to the ultimate test.” — Woman's World

SUNNY HOSTIN is the 3-time Emmy Award-winning legal journalist, New York Times bestselling author, and co-host of The View. On May 4, Hostin released her debut novel, Summer on the Bluffs (William Morrow), which skyrocketed to #11 on the New York Times Bestseller List, the first book in her "Summer" trilogy. Last fall, Hostin released her memoir, I Am These Truths: A Memoir of Identity, Justice, and Living Between Worlds, with HarperOne. Hostin has been featured in the New York Times, the Wall Street Journal, Forbes Woman, Essence, Newsweek, the New York Post, Latina, and Ebony. A sought-after public speaker, she has delivered a TEDxTalk called “A Possibility Model” and spoken at and moderated panels for the U.C. Berkeley Graduate School of Journalism, Corporate Counsel Women of Color, and the National Bar Association, and served as a witness at the Federal Judiciary’s Congressional Hearing for the Public’s Right of Access to the Courts. Hostin lives with her husband and two children in New York.

Other Works by Sunny Hostin