Hell and Other Destinations CD 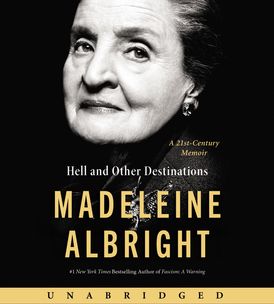 Hell and Other Destinations CD

Six-time New York Times bestselling author and former Secretary of State Madeleine Albright—one of the world’s most admired and tireless public servants—reflects on the final stages of one’s career, and working productively into your later decades in this revealing, funny, and inspiring memoir.

Featuring black and white photographs throughout, Hell and Other Destinations reveals this remarkable figure at her bluntest, funniest, most intimate, and most serious. It is the tale of our times anchored in lessons for all time, narrated by an extraordinary woman with a matchless zest for life.

Madeleine K. Albright was the 64th Secretary of State of the United States and the first woman to serve in that position. She is Chair of the Albright Stonebridge Group and Albright Capital Management. She is a Professor in the Practice of Diplomacy at the Georgetown University School of Foreign Service, Chair of the National Democratic Institute for International Affairs, and President of the Harry S. Truman Scholarship Foundation. In 2012, Dr. Albright was awarded the Presidential Medal of Freedom, the nation's highest civilian honor, in recognition of her contributions to international peace and democracy.