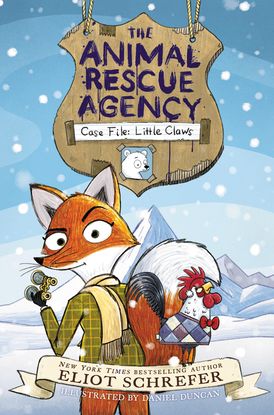 New York Times bestselling author Eliot Schrefer introduces a delightful and dynamic animal duo in a race against time to save a polar bear cub in the first book of this hilarious and heartwarming middle grade series about friendship and conservation.

When an animal is in trouble, there’s only one place to turn: the Animal Rescue Agency!

Dashing Esquire Fox used to organize the world’s most elaborate chicken raids until the day she encountered Mr. Pepper. Meeting the blustery old rooster changed her heart, convincing her to turn from a life of crime and instead form the Animal Rescue Agency, which masterminds rescue operations across the globe.

Esquire and her unlikely chicken business manager coordinate their far-flung agents to get them to the Arctic. In that frozen land they learn that what happened to the polar bear cub was no accident—and that saving him will pit them against the scariest predator in the world: a human.

"Moments of absurdity amplified by cartoon-inflected illustrations by Duncan make for a lighthearted read with environmental conservation at its core." — Publishers Weekly

"With its odd-couple protagonists (the daring, but slightly vain Esquire Fox and stodgy, sensible Mr. Pepper), and entertaining portrayal of the animal world, this new series by the Endangered author is full of lighthearted adventure. Cartoon-style illustrations by Duncan add to the story’s charm. This lively new series will appeal to fans of Elisabetta Dami’s “Geronimo Stilton” and other anthropomorphic animal adventure stories." — School Library Journal

"[An] amusing series opener. The book really shines in its descriptive details, from the hilariously disjointed way that the “animal internet” operates to the coziness of a rat-run pub under an auto shop. It’s not all silliness, however, as there are plenty of ecological lessons, from the effects of global warming to human carelessness." — Booklist

PRAISE FOR GOGI’S GAMBIT: ? “The second installment in this fast-paced fantasy is enhanced by the richly detailed rainforest setting... a tale about how to celebrate differences and still find unity. Another knockout in a series that will appeal to nature lovers, animal lovers, and fans of magical adventure.” — Kirkus Reviews (starred review)

?“Schrefer’s second book in the Lost Rainforest series continues the enthralling fantasy adventures of this eclectic group of animals and hints at where the next threat to the rain forest will come from. Fans of Mez’s Magic and Katherine Applegate’s Endling #1: The Last (2018) will eagerly devour Gogi’s Gambit.” — Booklist (starred review)

PRAISE FOR MEZ’S MAGIC: “Unlike anything I’ve read. Eliot Schrefer has mined the richness and depths of his setting to find a deeper magic, immersing us in a world that is at once complex, dangerous, beautiful, and ultimately demanding of our protection. A thrilling start to an exceptional new series.” — Soman Chainani, New York Times bestselling author of The School for Good and Evil series

? “While the story is pure fast-paced fantasy, the underlying issues are real. Ignorance among the species, racism, and intolerance of differences are rampant. An author’s note highlights the beauty and importance of the rainforest. Magic with depth in this new series stunner.” — Kirkus Reviews (starred review)

“With a memorable, quick-bantering cast, this kickoff to the Lost Rainforest series, a playful departure from Schrefer’s ape novels, brings fresh perspective to the magical animal subgenre. And, despite the fantasy setup, readers will come away learning quite a bit about this ecosystem and its inhabitants.” — Publishers Weekly

“Mez’s Magic is packed with as many jokes as fast-paced fight scenes. And Schrefer has created a stock of memorable characters—including Gogi, a monkey with self-esteem issues; Rumi, a delightfully urbane tree frog; and a manic, pixie-dream bat named Lima.” — New York Times Book Review

PRAISE FOR RESCUED:  ?“[T]he portrayal of Raja as an intelligent, complex individual is gripping and heartbreaking. Schrefer continues to be a vital voice for wildlife conservation and ape empathy.” — Publishers Weekly (starred review)

“This is a book that combines skillful interpretation of orangutan character, the cruelty inherent in keeping apes as pets, and the plight of the wild orangutans. Eliot has created unforgettable characters in Raja, the orphaned ape and his human ‘brother,’ John. Moving, fascinating and eye opening.” — Dr. Jane Goodall 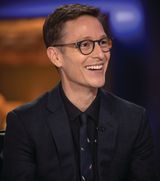 Eliot Schrefer is a New York Times bestselling author, has twice been a finalist for the National Book Award in Young People’s Literature, and has won the Green Earth Book Award and the Sigurd F. Olson Nature Writing Award for Children’s Literature. His novels include the Lost Rainforest series, Endangered, Threatened, Rescued, Orphaned, and two books in the Spirit Animals series. He lives in New York City, is on the faculty of the Hamline University and Fairleigh Dickinson University MFA in creative writing programs, and reviews books for USA Today. Visit him online at www.eliotschrefer.com.

Other Works by Eliot Schrefer

Queer Ducks (and Other Animals)

The Darkness Outside Us