Bravelands: Thunder on the Plains #1: The Shattered Horn 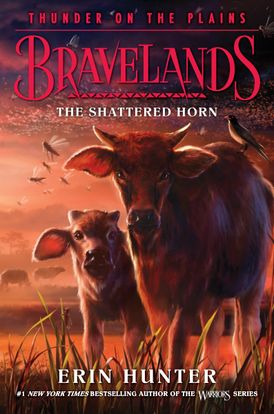 Bravelands: Thunder on the Plains #1: The Shattered Horn

A thrilling new arc in Erin Hunter’s bestselling Bravelands series! Set in the African highlands and told from three different animals’ points of view, this is a perfect adventure for dedicated fans and readers new to the Bravelands world.

Echo, a water buffalo, is chosen by the Great Spirit to lead after a horrific accident—but can’t command the respect of any of his herd. Stride the cheetah is keeping secrets from his coalition that could get him killed for disloyalty. And Tailgrabber, a young hyena, is desperate to find peace between her clan and the lions of Noblepride—even though it marks a betrayal of the hyenas’ longstanding allegiance to the Great Devourer.

As the structures that once guided their lives begin to crumble, can each of these three unlikely allies hold their own against the coming storm?

Full of epic adventure and thrilling intrigue, this adventure will thrill readers who love the Spirit Animals and Wings of Fire series, as well as the legion of dedicated fans who’ve made Erin Hunter a bestselling phenomenon.

Erin Hunter is inspired by a love of cats and a fascination with the ferocity of the natural world. In addition to having great respect for nature in all its forms, Erin enjoys creating rich mythical explanations for animal behavior. She is the author of the Warriors, Seekers, Survivors, Bravelands, and Bamboo Kingdom series. Erin lives in the UK.

Warriors: A Thief in ThunderClan