Fly Into the Wind

How to Harness Faith and Fearlessness on Your Ascent to Greatness 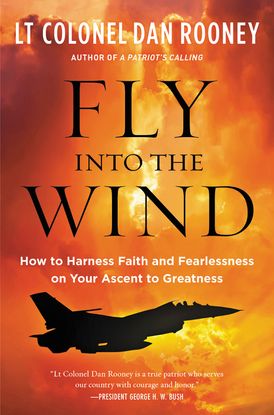 Fly Into the Wind

How to Harness Faith and Fearlessness on Your Ascent to Greatness

“Lt Colonel Dan Rooney is a true patriot who serves our country with courage and honor.”—George H.W. Bush, 41st President of the United States

Part spiritual guide and part call-to-action, Fly Into the Wind combines Lt Colonel Rooney’s fighter pilot stories with his discovery of faith and purpose in order to help each reader achieve a philosophy he calls CAVU, after the Air Force acronym that stands for “ceiling and visibility unrestricted.” CAVU describes the perfect conditions for flying a fighter jet, when steel-blue skies invite pilots to spread their wings like supersonic eagles. In today’s world of identity politics, fractured racial relations, and external turmoil, Rooney’s book will show how all of us are connected by God in more ways than we realize, and that the path to fulfillment begins with changing ourselves in order to better one another.

From the outside, Lieutenant Colonel Dan “Noonan” Rooney was living the American Dream: he was an F-16 fighter pilot, PGA Professional, husband to his college sweetheart, and father of five daughters. His position in life should have been a blessing. But a near-tragic mishap while piloting his F-16 triggered an ominous life storm that altered his trajectory and filled him with self-doubt.

Realizing that a jet takes off into the wind because it requires resistance over its wings to fly, Lt Colonel Rooney’s attitude toward the resistance he encountered in his life changed from resentment to humble introspection. Hyper-focused on the precise areas that are immediately under your control, CAVU is a disciplined approach to each day that will help you reshape, motivate, prioritize, and ultimately thrive. In Fly Into the Wind, Lt. Colonel Rooney breaks down CAVU into ten unique lines of effort (LOE), with each LOE building upon the previous one to provide a positive vector toward a new way of living. Along this enlightened path, readers will discover a renewed belief in themselves and the art of the possible. The time for self-discovery and ultimate achievement begins now.

“Lt Colonel Dan Rooney is a true patriot who serves our country with courage and honor.” - George H.W. Bush, 41st President of the United States

“Lt Colonel Dan Rooney transcends the best of the American Warrior Spirit. Fly Into the Wind is a powerful read that will absolutely help you discover your destined path and unlock your best life.”  - Sean Hannity, #1 New York Times bestselling author

“Lt Colonel Dan Rooney is an inspiration to us all. He’s made the tremendous commitment to help change the lives of children and spouses of fallen and disabled service men and women by providing them with the invaluable resource of education. This is truly a noble undertaking and I admire his courage and determination.” - Danica Patrick, professional race car driver

“Lt Colonel Dan has had a tremendous impact on my life. I am certain Fly Into the Wind will change your life in powerful ways.” - Gary Woodland, 2019 U.S. Open Champion

“Lt Colonel Dan will tell you he has been blessed, but we are the ones who have been blessed to know him. He is a uniter of people, a difference-maker, and one of the greatest patriots I have ever met.” - Jim Nantz, American sportscaster for CBS

“Lt Colonel Dan Rooney is not only a husband, father, and friend, but someone who I personally look up to.” - Rickie Fowler, PGA Tour Professional and former #1 ranked golfer in the world

"Lt Col Dan shares with the reader stories, techniques and a code of living that will help you perform in life at the highest level.” - Jack Nicklaus, legendary golfer, businessman, and philanthropist

"It is my job to craft the best possible game plan to win football games–Fly Into The Wind is an extraordinary game plan to win at life!" - Urban Meyer, 3-Time National Championship Football Coach 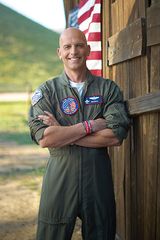 Lt Col Dan Rooney is the founder of the Folds of Honor, an F-16 Fighter Pilot (1,800 hours of flight time) with 3 combat tours in Iraq, and a PGA Golf Professional. He is a Fox News contributor and host of the Fox Nation's series Fly Into the Wind. As an author he has written two books, A Patriot's Calling: Living Life between Fear and Faith and Fly Into the Wind: How to Harness Faith and Fearlessness On Your Ascent to Greatness. Lt Col Rooney was the motivational team speaker for two US Ryder Cup teams.

He lives in Owasso, Oklahoma with his wife, five daughters, and three dogs.