Crab and Snail: The Invisible Whale 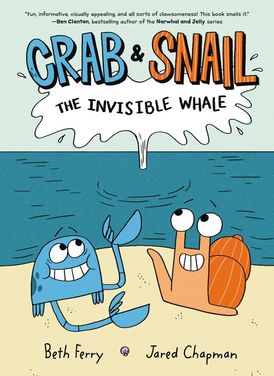 Crab and Snail: The Invisible Whale

The never-ending rain is putting a damper on Crab and Snail’s plans for a sunny, funny day. So when the BBFs (Best Beach Friends) realize that it’s only raining on them, they put their heads together and consult one know-it-all gull (he really does know it all!) to get to the bottom of it. By the time the rain clears, the duo will have made a new friend and learned something new and wonderful about friendship!

Crab and Snail are everyone’s next favorite characters in the graphic early reader space. Fans of Narwhal & Jelly; Pea, Bee, & Jay; and Arlo & Pips will love these quirky characters and clever stories.

"A character-based volume that reads like a cross between SpongeBob SquarePants and The Muppet Show."—Publishers Weekly (starred review)

A character-based volume that reads like a cross between SpongeBob SquarePants and The Muppet Show: there’s a passel of adorably goofy marine characters, lots of snappy repartee, and even a wisecracking chorus in the form of two barnacle brothers.  — Publishers Weekly (starred review)

Fun, informative, visually appealing, and all sorts of clawsomeness! This book snails it. — Ben Clanton, Bestselling author of the Narwhal and Jellyfish series

Wow! Crab and Snail are sure to make a big splash with young readers. — Geisel Award winner Greg Pizzoli

It's not hard to sea what's so funny with Crab & Snail - they'll turn the tide on your rainy day blues! — Jeffrey Brown, author of Darth Vader and Son and My Teacher Is A Robot

Beth Ferry is the New York Times bestselling author of numerous picture books, including Stick and Stone, The Scarecrow, and The Nice Dream Truck. She lives with her family by the beach in New Jersey, where she finds inspiration in the salty air. In addition to writing picture books, Beth also writes graphic novels for emerging readers.

Other Works by Beth Ferry

Jared Chapman is the author-illustrator of the popular books Vegetables in Underwear and Fruits in Suits. Other books he has written and illustrated include Steve, Raised by Wolves and Pirate, Viking & Scientist. He is the illustrator of Wordplay and several other picture books. Jared was born in Louisiana, grew up in Texas, went to college in Georgia, and now calls the piney woods of northeast Texas his home. Visit him at www.jaredchapman.com.

Other Works by Jared Chapman

Crab and Snail: The Evil Eel

Crab and Snail: The Tidal Pool of Cool

Sealed with a Kiss