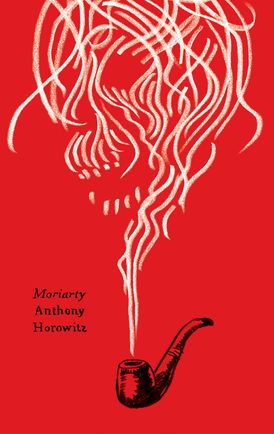 The game is once again afoot in this thrilling mystery from the New York Times bestselling author of The House of Silk and The Word is Murder, sanctioned by the Conan Doyle estate, which explores what really happened when Sherlock Holmes and his arch nemesis Professor Moriarty tumbled to their doom at the Reichenbach Falls—now available in a limited Olive Edition.

“The author turns up the suspense, the sleuths turn up the clues, and crooks end up dead all while Moriarty’s specter hovers. Anything but elementary, this clever thriller is sure to please Sherlock fans.”—People Magazine, Book of the Week Review

Days after Holmes and Moriarty disappear into the waterfall's churning depths, Frederick Chase, a senior investigator at New York's infamous Pinkerton Detective Agency, arrives in Switzerland. Chase brings with him a dire warning: Moriarty's death has left a convenient vacancy in London's criminal underworld. There is no shortage of candidates to take his place—including one particularly fiendish criminal mastermind.

Chase is assisted by Inspector Athelney Jones, a Scotland Yard detective and devoted student of Holmes's methods of deduction, whom Conan Doyle introduced in The Sign of Four. The two men join forces and fight their way through the sinuous streets of Victorian London in pursuit of this sinister figure, a man much feared but seldom seen, who is determined to stake his claim as Moriarty's successor.

“Ultimately, the dastardly deeds, the cleverness behind the crimes and the detailed narrative spark multiple echoes of Holmesian elements while producing something new: a pleasurably imaginative theory of what might happened immediately following the showdown at the Falls.” - Boston Globe

“A tour de force quite unlike any other fruit from these densely plowed fields… canny Sherlock-ian Horowitz still has more tricks up his sleeve.… A rare treat, a mystery as original as it is enthralling.” - Kirkus Reviews (starred review)

“Though Horowitz dishes up the gore and violence with relish, he also offers all the tropes one might expect from a Holmes yarn, including baffling coded messages, impossible murders and clever red herrings... its plotting just as brilliantly gnarly but its tone more self-aware and laced with in-jokes.” - Financial Times

“The author turns up the suspense, the sleuths turn up the clues, and crooks end up dead all while Moriarty’s specter hovers. Anything but elementary, this clever thriller is sure to please Sherlock fans.” - People Magazine, Book of the Week Review

“A stunning riff on the Holmes-Moriarty clash. It’s full of allusions to the Holmes cannon that Sherlockians will congratulate themselves for spotting, then wince moments later when Horowitz gently reveals the prank.... Horowitz spins his tale in pitch-perfect Watsonian prose…setting readers up for a finale that is truly jaw-dropping.” - Booklist, (starred)

“In this skilfully executed follow on, Horowitz takes up the Conan Doyle baton and creates a suitably stylish and twisty detective story.” - Sunday Mirror (UK)

“Thrilling and compelling, with a stunning twist, this is written as if Conan Doyle were at Horowitz’s shoulder, and is—in my view—the finest crime novel of the year.” - Daily Mail (London)

“An unpredictable and twist-filled mystery from start to finish. But what do you expect from the man penning the next James Bond novel?” - Shortlist (UK)