The Rise and Reign of the Mammals

A New History, from the Shadow of the Dinosaurs to Us 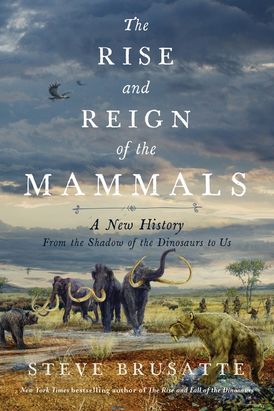 The Rise and Reign of the Mammals

A New History, from the Shadow of the Dinosaurs to Us

By “one of the stars of modern paleontology" (National Geographic), a sweeping and revelatory new history of mammals, illuminating the lost story of the extraordinary family tree that led to us

Though humans claim to rule the Earth, we are the inheritors of a dynasty that has reigned over the planet for nearly 66 million years, through fiery cataclysm and ice ages: the mammals. Our lineage includes saber-toothed tigers, woolly mammoths, armadillos the size of a car, cave bears three times the weight of a grizzly, clever scurriers that outlasted Tyrannosaurus rex, and even other types of humans, like Neanderthals. Indeed humankind and many of the beloved fellow mammals we share the planet with today—lions, whales, dogs—represent only the few survivors of a sprawling and astonishing family tree that has been pruned by time and mass extinctions. How did we get here?

In his acclaimed bestseller The Rise and Fall of the Dinosaurs—hailed as “a masterpiece of science writing" by the Washington Post—American paleontologist Steve Brusatte enchanted readers with his definitive his - tory of the dinosaurs. Now, picking up the narrative in the ashes of the extinction event that doomed T-rex and its kind, Brusatte explores the remarkable story of the family of animals that inherited the Earth—mammals— and brilliantly reveals that their story is every bit as fascinating and complex as that of the dinosaurs.

Beginning with the earliest days of our lineage some 325 million years ago, Brusatte charts how mammals survived the asteroid that claimed the dinosaurs and made the world their own, becoming the astonishingly diverse range of animals that dominate today's Earth. Brusatte also brings alive the lost worlds mammals inhabited through time, from ice ages to volcanic catastrophes. Entwined in this story is the detective work he and other scientists have done to piece together our understanding using fossil clues and cutting-edge technology.

A sterling example of scientific storytelling by one of our finest young researchers, The Rise and Reign of the Mammals illustrates how this incredible history laid the foundation for today's world, for us, and our future.

"A whirlwind tour of mammal evolution. … Brusatte’s deep knowledge of the fossil record creates a rich tapestry in which each thread is a mammalian lineage. These interwoven threads dip in and out intermittently and sometimes disappear altogether in the finality of extinction, but those that remain always unspool in a bright burst of color to fill the gap.” — Science

"Beautifully told. Brusatte writes with precision and panache. From tiny fossils he conjures up vivid worlds. Seen through his eyes, the mammals are every bit as engaging as the reptiles from whom they inherited the earth. ... When the first Jurassic Park film was released in 1993, it inspired a host of budding school-aged paleontologists. Brusatte was one of them. Don't be surprised if in decades to come this lovely book leads to more of them choosing to focus on the mouse-sized mammal rather than the megalosaurus." — The Times (UK)

"[Brusatte] is a nimble storyteller and he’s chosen an engrossing story to tell. ... It’s satisfying to sit back and admire the full tapestry as presented in The Rise and Reign of the Mammals. Reading this book reminded me what I most enjoy about geology, paleontology and the evolution of life on Earth: This planet has got some epic stories.” — Science News

“Outstanding. … Employs lucid prose and generous illustrations to describe the explosion of mammal species that followed the disappearance of dinosaurs. A must for any list of the best popular science books of the year.” — Kirkus Reviews (starred review)

"Reluctant to foreground mammalian ingenuity, Brusatte slyly sneaks it in through the back door. Human cleverness is exemplified by the unstinting praise Brusatte gracefully extends to his colleagues, many of them women." — Wall Street Journal

“This is a very beautiful story-driven, well-written book. This is like a fun novel you’re reading.” — Dax Shepherd, Armchair Expert

"Terrific. ... In one engaging chapter after another, Brusatte takes readers through the long story of the little mammals that took over the world from those tyrannosaurs. It’s a fascinating story, and Brusatte fills it out with plenty of digressions about some of the people who dedicated their time to learning it." — Christian Science Monitor

“The manner in which he tells the story, our story, is nothing short of prosaic prose transformed into poetry. ... Brusatte presents a myriad of facts about todays’ mammalian cohabitors of our planet that will whet your appetite and fire up your imagination.” — Times of Israel

"The story of the evolutionary history of mammals is told with elan in this clear, engaging book. Plenty of writers have tackled mammalian biology, but The Rise and Reign of the Mammals stands out for its brilliant balance of scientific detail and lively, efficient storytelling. Brusatte has a clear understanding of the book he is writing." — New Scientist

"Five stars. Take a journey through time to the origins of life as we know it with this riveting read. A real page-turner that proves science fact is more amazing than science fiction." — The Sun (UK)

"If you loved Steve Brusatte's runaway bestseller The Rise and Fall of the Dinosaurs, you ought to keep an eye out for its sequel of sorts, which tracks the journey of mammals from our humble beginnings as survivors of a global catastrophe to one of the dominant forces on the planet." — Thrillist

"In this detailed, deeply researched and entertaining book the author summarises why and how mammals have managed to hold sway for so much of the last 65 million years. ... Brusatte’s real achievement is to show us that, for all its sheer weight of numbers and impact, Homo sapiens is just a single point, among millions of species over 200 million years." — The Spectator

"With the demise of dinosaurs almost 66 million years ago came the flourishing of our branch of the tree of life-- mammals. Steve Brusatte's The Rise and Reign of the Mammals, tells the epic story of how our mammalian cousins evolved to fly, walk, swim, and walk on two legs. His enthusiasm and deep knowledge infuse this lively journey of millions of years of evolution with infectious enthusiasm." — Neil Shubin, bestselling author of Your Inner Fish and University of Chicago paleontologist

"Today, mammals, especially humans, dominate life on earth, both on land and in the oceans. We think of ourselves as the apex of all life. But it was not always so, and this book is a fascinating account of how mammals survived the great extinction that destroyed the dinosaurs and evolved to their current position of dominance. A worthy sequel to The Rise and Fall of the Dinosaurs by the same author." — Venki Ramakrishnan, 2009 Nobel Prize winner in Chemistry and Cambridge University biologist 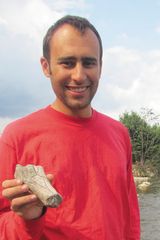 Steve Brusatte, PhD, is an American paleontologist who teaches at the University of Edinburgh, in Scotland. He is the author of the international bestseller The Rise and Fall of the Dinosaurs. The paleontology advisor on the Jurassic World film franchise, Brusatte has named more than fifteen new species, including the tyrannosaur “Pinocchio rex” (Qianzhousaurus), the raptor Zhenyuanlong, and several ancient mammals. His research and writing has been featured in Science, the New York Times, Scientific American, and many other publications.

The Age of Dinosaurs