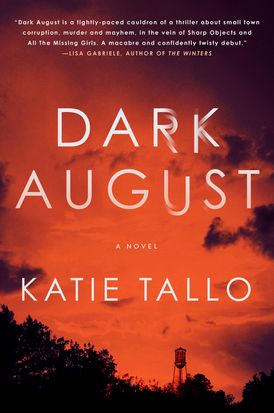 “Dark August is a tightly-paced cauldron of a thriller about small town corruption, murder and mayhem, in the vein of Sharp Objects and All The Missing Girls. A macabre and confidently twisty debut.” — Lisa Gabriele, internationally bestselling author of The Winters

An electrifying, page-turning debut about a young woman haunted by her tragic past, who returns to her hometown and discovers that there might be more to her police detective mother’s death—and last case—than she ever could have imagined.

Augusta (Gus) Monet is living an aimless existence with her grifter boyfriend when she learns that her great grandmother—her last living relative—has just died. Ditching her boyfriend, Gus returns to the home she left as a young girl. Her inheritance turns out to be a dilapidated house and an old dog named Levi. While combing through her great grandmother’s possessions, Gus stumbles across an old trunk filled with long-lost childhood belongings. But that’s not all the trunk contains. She also discovers cold case files that belonged to her mother, a disgraced police detective who died in a car accident when Gus was eight. Gus remembers her mother obsessing over these very same documents and photographs, especially a Polaroid of a young ballerina.

When Gus spots a front-page news story about the unearthing of a body linked to one of the cold case files from her childhood trunk, she can’t resist following her mother’s clues. As she digs deeper, determined to finish her mother’s investigation, her search leads her to a deserted ghost town, which was left abandoned when the residents fled after a horrific fire. As Gus’ obsession with the case grows, she inadvertently stirs up the evils of the past, putting her life in danger. But Gus is undeterred and is committed to uncovering long-buried secrets, including the secrets surrounding a missing geology student, the young ballerina in the Polaroid, a prominent family’s devastating legacy, and a toxic blast that blew an entire town off the map.

But is Gus ready to learn the truths that culminated on one terrible August night, more than a decade earlier, when lives were taken, and secrets were presumed buried forever…?

“An engrossing mystery . . . . Distinctive characters and an intricate plot will keep readers turning the pages. Tallo is off to a promising start.” — Publisher's Weekly

“Plucky heroines make me queasy. (It takes so much energy to be plucky.) The protagonist of Katie Tallo's first novel, Dark August, is better than that. . . . it's easy to get caught up in this story.” — New York Times Book Review

“A story that is never short on tumult.” — Toronto Star

“Dark August is a tightly-paced cauldron of a thriller about small town corruption, murder and mayhem, in the vein of Sharp Objects and All The Missing Girls. A macabre and confidently twisty debut.” — Lisa Gabriele, internationally bestselling author of The Winters

“What elevates Tallo’s galloping story is the freshness of the writing, and the deep explorations of character. An imaginative thriller—as much about family, loss, greed, and a young woman’s attempt to find a place in the world, as it is about solving a long-buried mystery.” — Peter Heller, New York Times bestselling author of The Dog Stars, nationally bestselling author of The Painter, Celine, and The River

“A solid thriller with a determined strong female character in Gus. Twists and turns and flashbacks keep the reader engaged throughout the story, right up to the climatic reveal.” — Red Carpet Crash

“In this epic mystery-thriller combo, no one is to be trusted as Gus uncovers long-buried secrets . . . all packed with small town corruption and murder.” — Parade

“With a wonderfully diverse cast of characters and arresting prose, Tallo creates a plot whose pace rises gradually from breezy to tornadic, and she does so with so many twists that the reader stops trying to unravel the truth and instead enjoys the wild ride. At once brutal and beautiful, Dark August offers multiple pleasures and heralds the arrival of an author of great promise.” — Fredericksburg Free Lance-Star

“It has all the makings of a fast-paced, thrilling “who done it” . . . . One of the best mysteries I have read in a long time.” — Girly Book Club

“Once you’ve started reading, you will find it difficult to stop. The manner in which Tallo puts all the pieces together and tantalizes us with clues is clever and masterful.” — PamelaKramer.com 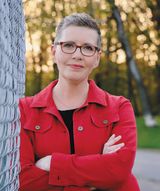 Katie Tallo has been an award-winning screenwriter and director for more than two decades. In 2012, Katie was inspired to begin writing novels. Dark August is her debut novel. Katie has a daughter and lives with her husband in Ottawa, Ontario.

Other Works by Katie Tallo