The Life and Times of Tennessee Williams's Greatest Creation 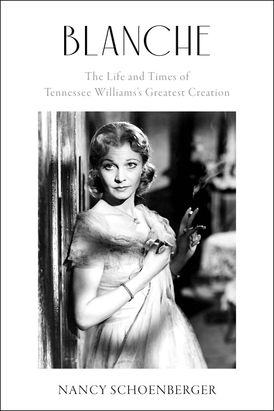 The Life and Times of Tennessee Williams's Greatest Creation

A penetrating consideration of Tennessee Williams’s most enduring character—Blanche DuBois from A Streetcar Named Desire—written by the co-author of The Fabulous Bouvier Sisters and Furious Love.

Ever since Jessica Tandy glided onto the stage in Tennessee Williams’s A Streetcar Named Desire at the Ethel Barrymore Theatre in 1947, Blanche DuBois has fascinated generations of audiences worldwide and secured a place in the history of literature, theater, and film. One of Williams’s greatest creations, Blanche has bedazzled, amused, and broken the hearts of generations of audiences. Before the Covid pandemic, the stage classic was performed somewhere in the world every hour. It has been adapted into a ballet and an opera, and it was satirized in an episode of The Simpsons. The final twelve words Blanche utters at the play’s end—“I have always depended on the kindness of strangers”—have taken on a life of their own. Endlessly fascinating, this indelible figment of one of America’s greatest midcentury playwrights garners nearly universal interest—but why?

In Blanche, Nancy Schoenberger searches for the answer. An exploration of the cultural impact of Blanche DuBois, Schoenberger’s absorbing study examines Tennessee Williams's most enduring creation through the performances of seven brilliant actresses who have taken on the role—Jessica Tandy, Vivien Leigh, Ann-Margret, Jessica Lange, Patricia Clarkson, Cate Blanchett, and Jemier Jackson—as well as the influence of the playwright's tragic sister, Rose Williams, the person he was most haunted and inspired by. In examining various Blanches from throughout the decades and their critical reception, Schoenberger analyzes how our perception and understanding of this mesmerizing figure has altered and deepened over time. Exploring themes of womanhood, sexuality, mental illness, and the idealized South, Blanche is an engrossing cultural history of a rich and complex character that sheds light on who we are.

“This lavish portrait plumbs the tensions between bookish, regal Jackie and “lady-in-waiting” Lee, who sought the limelight only to be eclipsed by her iconic sister.” — O, the Oprah Magazine on THE FABULOUS BOUVIER SISTERS

“Sam Kashner and Nancy Schoenberger paint a lush picture of the complicated relationship between sisters Jackie Onassis and Lee Radziwill.... Gossipy gems are studded throughout.” — Vanity Fair on THE FABULOUS BOUVIER SISTERS

“Readers drawn to the Kennedy mystique will savor this intricate chronicle rife with romance, tragedy, and surprising details, such as that Jackie may have helped choose JFK’s paramours. The authors provide an intimate view of two sisters, both famous in their own rights.” — Publishers Weekly (starred review) on THE FABULOUS BOUVIER SISTERS

“Don’t be too put off by the salacious title—though the co-writers definitely don’t avoid gossipy material, their book is no hatchet job, and actually draws from extensive interviews with Radziwill, who’s now 84 years old. The result is a lively and highly entertaining profile of two dynamic and super-stylish sibling-rivals.” — BBC America on THE FABULOUS BOUVIER SISTERS

“An unfailingly respectful and journalistically honest chronicle. . . . Where this book breaks ground is in its ability to humanize these colossal celebs. . . . Reads like a Shakespearean drama.” — USA Today on FURIOUS LOVE

“An]entertaining, blow-by-blow account of the life and times of an epic Hollywood couple . . . There is no shortage of saucy anecdotes in Furious Love.” — Wall Street Journal on FURIOUS LOVE

“A five-alarm blaze of a biography that enthralls like an Olympian epic. . . . The authors make an excellent case that each deepened the other’s craft.” — Philadelphia Inquirer on FURIOUS LOVE

Poet and biographer Nancy Schoenberger is the author of Dangerous Muse: The Life of Lady Caroline Blackwood. Schoenberger taught for many years at the College of William &Mary, where she directed the Creative Writing Program

Other Works by Nancy Schoenberger