How Upright Walking Made Us Human 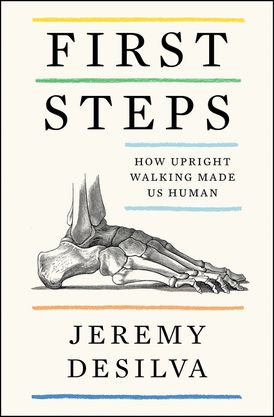 How Upright Walking Made Us Human

Winner of the W.W. Howells Book Prize from the American Anthropological Association and named one of the best science books of 2021 by Science News

“DeSilva takes us on a brilliant, fun, and scientifically deep stroll through history, anatomy, and evolution, in order to illustrate the powerful story of how a particular mode of movement helped make us one of the most wonderful, dangerous and fascinating species on Earth.”—Agustín Fuentes, Professor of Anthropology, Princeton University and author of Why We Believe: Evolution and the Human Way of Being

Humans are the only mammals to walk on two, rather than four legs—a locomotion known as bipedalism. We strive to be upstanding citizens, honor those who stand tall and proud, and take a stand against injustices. We follow in each other’s footsteps and celebrate a child’s beginning to walk. But why, and how, exactly, did we take our first steps? And at what cost? Bipedalism has its drawbacks: giving birth is more difficult and dangerous; our running speed is much slower than other animals; and we suffer a variety of ailments, from hernias to sinus problems.

In First Steps, paleoanthropologist Jeremy DeSilva explores how unusual and extraordinary this seemingly ordinary ability is. A seven-million-year journey to the very origins of the human lineage, First Steps shows how upright walking was a gateway to many of the other attributes that make us human—from our technological abilities, our thirst for exploration, our use of language–and may have laid the foundation for our species’ traits of compassion, empathy, and altruism. Moving from developmental psychology labs to ancient fossil sites throughout Africa and Eurasia, DeSilva brings to life our adventure walking on two legs.

Delving deeply into the story of our past and the new discoveries rewriting our understanding of human evolution, First Steps examines how walking upright helped us rise above all over species on this planet.

“A book that strides confidently across this complex terrain, laying out what we know about how walking works, who started doing it and when. DeSilva proposes that our bipedalism is at the root of our uniqueness as a species, and the book is carefully structured, neatly braiding his own research with the wider narrative and history of human evolution. . . . DeSilva is a genial companion on this stroll through the deep origins of walking.”
— New York Times Book Review

“Before our ancestors thought symbolically, before they used fire, before they made stone tools, or even entered the open savanna, our ancestors walked upright. In one way or another, this odd locomotory style has underwritten the whole spectrum of our vaunted human uniquenesses, from our manual dexterity to our hairless bodies, and our large brains. In the modern world it even influences the way other people recognize us at a distance, and it is crucial to our individual viability. In this authoritative but charmingly discursive and accessible book, Jeremy DeSilva lucidly explains how and why.” — Ian Tattersall, author of Masters of the Planet and The Strange Case of the Rickety Cossack

“Master anatomist and paleontologist Jeremy DeSilva makes no bones about the fact that when looking at fossils ‘I let myself be emotional…’ Thus does this world expert and gifted story teller take us on a tour through the sprawling, complicated, saga of human origins. Drawing on his personal knowledge of topics ranging from sports medicine to childcare and his acquaintance with a host of colorful characters—whether lying inert in museum drawer, sitting behind microscopes or feuding with one other—DeSilva adds flesh and projects feelings onto the bones he studies, a tour de force of empathic understanding.” — Sarah Blaffer Hrdy, author of Mother Nature and Mothers and Others: The evolutionary origins of mutual understanding

“It should come as no surprise that walking matters. But what will surprise most readers is how and why. DeSilva takes us on a brilliant, fun, and scientifically deep stroll through history, anatomy, and evolution, in order to illustrate the powerful story of how a particular mode of movement helped make us one of the most wonderful, dangerous and fascinating species on Earth.”   — Agustín Fuentes, Professor of Anthropology, Princeton University and author of Why We Believe: Evolution and the Human Way of Being

"DeSilva has a gift for identifying important but often overlooked observations . . . While the subject of human evolution might seem daunting—especially discussions of the relationships between ape and hominin ancestors—DeSilva uses personable language and always keeps it interesting." — Library Journal (starred review)

“A brisk jaunt through the history of bipedalism . . . DeSilva’s ability to turn anatomical evidence into a focused tale of human evolution and his enthusiasm for research will leave readers both informed and uplifted.” — Publishers Weekly

“This is breezy popular science at its best, interweaving anecdotes from the field and lab with scientific findings and the occasional pop culture reference. DeSilva gets extra credit for naming oft-overlooked experts who made key discoveries . . . [DeSIlva] makes a compelling case overall.” — Science News

Jeremy DeSilva is an anthropologist at Dartmouth College. He is part of the research team that discovered and described two ancient members of the human family tree—Australopithecus sediba and Homo naledi. He has studied wild chimpanzees in Western Uganda and early human fossils in museums throughout Eastern and South Africa. From 1998 to 2003, he worked as an educator at the Boston Museum of Science. He continues to be passionate about science education and travels throughout New England, giving lectures on human evolution. He and his wife, Erin, live in Norwich, Vermont, with their twins, Ben and Josie.

Other Works by Jeremy DeSilva