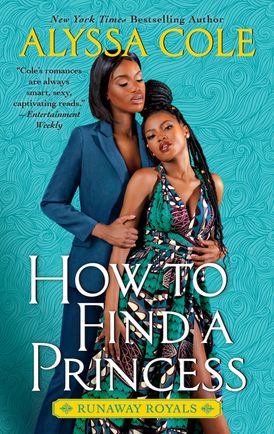 Makeda Hicks has lost her job and her girlfriend in one fell swoop. The last thing she’s in the mood for is to rehash the story of her grandmother’s infamous summer fling with a runaway prince from Ibarania, or the investigator from the World Federation of Monarchies tasked with searching for Ibarania’s missing heir.

Yet when Beznaria Chetchevaliere crashes into her life, the sleek and sexy investigator exudes exactly the kind of chaos that organized and efficient Makeda finds irresistible, even if Bez is determined to drag her into a world of royal duty Makeda wants nothing to do with.

When a threat to her grandmother’s livelihood pushes Makeda to agree to return to Ibarania, Bez takes her on a transatlantic adventure with a crew of lovable weirdos, a fake marriage, and one-bed hijinks on the high seas. When they finally make it to Ibarania, they realize there’s more at stake than just cash and crown, and Makeda must learn what it means to fight for what she desires and not what she feels bound to by duty.

“Alyssa Cole is the newly coronated queen of contemporary royal romance! A Princess in Theory is delicious fun. It has everything anyone could ever want in a royal romance, including a smart, funny heroine; a sweetly sexy prince; swoon-worthy romance; and an epic happily-ever-after. Long live the queen!” - Meg Cabot, #1 New York Times bestselling author of The Princess Diaries

“The best new romance I’ve read in a while.” - New York Times Book Review on A Princess in Theory

“In Cole’s world, royalty and romance go hand in hand with compassion, open-heartedness, and intelligence, as well as a clear-eyed sense of real-world politics. A Princess in Theory is a fairy tale, yes, but one consistently grounded in reality, which makes the happily-ever-after all the more satisfying.” - Entertainment Weekly

“Cole’s humorous and delightful romance is perfect for those looking for a fun read with a memorable cast of characters and neurodivergent representation, whether the reader is new to Cole’s work or an established fan.” - Library Journal

“Bitingly funny…Cole makes virtuoso use of the familiar rhythms of a romance arc. Joyful and absolutely perfect.” - New York Times

“Alyssa Cole is best known for her swoon-worthy romances.”  - PopSugar

“If you like faux engagements, ultra steamy scenes, and an eventual happily-ever-after, this one’s for you.” - Oprahmag.com

"Neuro-divergent nerds…are a highlight of this treat of a story.” - Washington Post (Best Romances of 2019)

“Alyssa Cole has rightfully garnered acclaim from all corners for the impeccable construction and emotional complexity of her romance novels. But her new novel, A Duke by Default, underscored something about her writing that I think deserves to be celebrated just as much—how joyfully and unrepentantly nerdy her work is.” - BookPage

“Cole explores sexual and gender identities, grief, self-respect, acceptance, and love in this faultless romance. She weaves family drama and emotional growth into a passion-filled story worthy of its irresistibly complicated (and diverse) characters. This affair of the heart is deeply satisfying.” - Publishers Weekly (starred review)

A Duke by Default

A Princess in Theory