On the Death of Rebellion 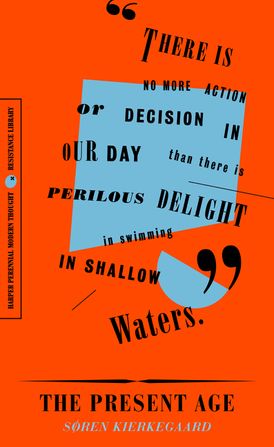 On the Death of Rebellion

“A revolutionary age is an age of action; ours is the age of advertisement and publicity. Nothing ever happens but there is immediate publicity everywhere.”— From The Present Age

In The Present Age (1846), Søren Kierkegaard analyzes the philosophical implications of a society dominated by the mass-media. What makes the essay so remarkable is the way it seems to speak directly to our time—i.e. the Information Age—where life is dominated by mere “information” not true “knowledge.” Kierkegaard even goes so far as to say that advertising and publicity almost immediately co-opts and suppresses revolutionary actions/thoughts.

A stunningly prescient essay that foresaw the rise of twenty-four-hour news and social media, The Present Age examines the philosophical and political implications of a culture of endless, inconsequential commentary and debate.

In times of crisis, the great works of philosophy help us make sense of the world. The Harper Perennial Resistance Library is a special five-book series highlighting short classic works of independent thought that illuminate the nature of truth, humanity's dangerous attraction to authoritarianism, the influence of media and mass communication, and the philosophy of resistance—all critical in understanding today's politically charged world.

“Those who would know Kierkegaard can do no better than to begin with this book.... In The Present Age we find the heart of Kierkagaard.” — Walter Kaufman, from the "Introduction"

“The Present Age shows just how original Kierkegaard was. He brilliantly foresaw the dangers of the lack of commitment and responsiblity in the Public Sphere. When everything is up for endless detached critical comment as on blogs and cable news, action finally becomes impossible.” — Hubert L. Dreyfus, University of California, Berkeley

Søren Kierkegaard (1813–1855) lived in Copenhagen, Denmark. His books include Works of Love and Spiritual Writings (translated and edited by George Pattison).

Other Works by Soren Kierkegaard