A Tale from the Age of Wonder 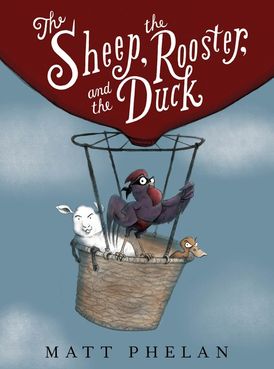 A Tale from the Age of Wonder

“Incredibly creative. . . . A little bit of history, a touch of mystery, and heaps of fun.”—Booklist (starred review)

Wherever there is injustice, nefarious plots, or threats to society, the Sheep, the Rooster, and the Duck are there to stop them!

A sly villain with a plan to cause havoc across the globe is no match for three extraordinary animals—and their two young human friends. From acclaimed author and artist Matt Phelan, The Sheep, the Rooster, and the Duck is a hilarious, action-packed, and highly illustrated middle grade adventure perfect for fans of Skunk and Badger and Flora & Ulysses.

The very first passengers to ride in a hot-air balloon were a sheep, a rooster, and a duck in 1783. And while hot-air balloons are indeed wondrous, ten-year-old Emile is too busy being the fastidious caretaker of ambassador Benjamin Franklin’s château in Paris to think much about them.

But soon, young Emile finds himself right in the middle of a sinister plot. And right in the middle of the secret headquarters for France’s undercover guardians—the very same sheep, rooster, and duck that piloted the first hot-air balloon. If Emile can muster his courage and be bold, he may be the key to helping the heroes save both Benjamin Franklin and the world.

Award-winning author Matt Phelan’s The Sheep, the Rooster, and the Duck is a highly illustrated adventure full of secrets, hijinks, and reimagined historical events. This rip-roaring and surprising story is ideal for reluctant readers, aspiring heroes, and fans of Peter Brown’s The Wild Robot.

“In Matt Phelan’s up-tempo “The Sheep, the Rooster, and the Duck,". . . three 18th-century French animal aeronauts also happen to be the most extraordinary secret agents in the world . . . Without breaking a sweat, Phelan spins an intoxicating yarn featuring secret societies, swordplay and spycraft. . . . A parade of historical personalities figure prominently in the plot and add to the fun. . . . It will be hard for young readers to put down.” — New York Times Book Review

“Farm animals and French children unite to save the fledgling United States from a scheming mastermind in this airy 18th-century adventure. . . . In a mix of prose and profuse graphite drawings that break into mostly wordless sequential panels for action scenes, Phelan lays out a rousing series of chases, clashes, ambushes, and rescues both on and above the ground on the way to a triumphant outcome. . . . A grand, giddy, and, at times, literally soaring tale.” — Kirkus Reviews (starred review)

“Phelan offers a delightful historical re-imagining, centering animals as spies. . . . Diplomat Benjamin Franklin resides in France, working on inventions . . . When Franklin’s drawings fall into the hands of evil Count Cagliostro, it’s up to the spies—sheep Bernadette, duck Jean-Luc, and masked rooster Pierre (aka Bête Noire, the Scourge of the Underworld)—as well as their compatriot Sophie and Franklin’s trusty 10-year-old servant Emile, to save the day. . . . This amusing, fast-paced tale of land, sky, and spies will easily draw in reluctant readers.” — Publishers Weekly (starred review)

“Ten-year-old Emile lives a staid but satisfying life as a house servant in eighteenth-century France . . . and when Emile catches a mouse seemingly spying on his employer (clutching a tiny notebook and pencil in his paws), the boy follows the rodent to the secret lair of France’s most revered undercover guardians. . . . Incredibly creative and equally silly, mixing historical figures and locations with offbeat humor and adventure. There are outrageous inventions, whimsical secret societies, and dastardly villains . . . A little bit of history, a touch of mystery, and heaps of fun.” — Booklist (starred review)

“Benjamin Franklin, lingering in France after America’s Revolution, has been scribbling notes and illustrations for a heat ray to be mounted on a hot air balloon, and there are spies bent on purloining said notes for nefarious purposes . . . Wordless sequential art brings flashes of real charm, and readers looking for more whimsy than realism will enjoy this as a history-inspired romp.” — Bulletin of the Center for Children’s Books

“Readers will adventure with the characters through sinister plots and awkward and humorous situations as they work to outsmart the villains . . . This extraordinary group of animal spies is brought to life through witty dialogue, and the graphic novel–type illustrations are a huge part of the storytelling. . . . It is a story of friendship and bravery, and a celebration of history. A fun, fast-paced adventure with tons of historical references and witty humor. Great for all readers and as a classroom read-aloud.”
— School Library Journal

Matt Phelan is the creator of the graphic novels The Storm in the Barn (winner of a Scott O’Dell Award); Around the World; Bluffton; and the New York Times bestseller Snow White. He is also the author of Knights vs. Dinosaurs, Knights vs. Monsters, and Knights vs. the End (of Everything). Matt Phelan lives in Ardmore, Pennsylvania. www.mattphelan.com

Other Works by Matt Phelan

Matt Phelan is the creator of the graphic novels The Storm in the Barn (winner of a Scott O’Dell Award); Around the World; Bluffton; and the New York Times bestseller Snow White. He is also the author of Knights vs. Dinosaurs, Knights vs. Monsters, and Knights vs. the End (of Everything). Matt Phelan lives in Ardmore, Pennsylvania. www.mattphelan.com

Other Works by Matt Phelan

A Snow Day for Plum!

Leave It to Plum!

Knights vs. the End (of Everything)