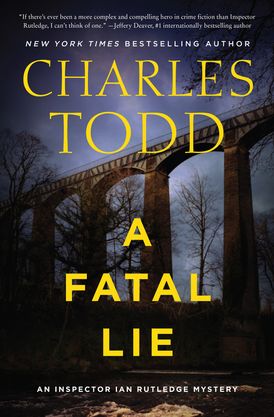 “If there’s ever been a more complex and compelling hero in crime fiction than Inspector Rutledge, I can’t think of one.” —Jeffery Deaver

In one of his most puzzling cases, Scotland Yard Inspector Ian Rutledge must delve deep into a dead man’s life and his past to find a killer determined to keep dark secrets buried.

A peaceful Welsh village is thrown into turmoil when a terrified boy stumbles on a body in a nearby river. The man appears to have fallen from the canal aqueduct spanning the valley. But there is no identification on the body, he isn’t a local, and no one will admit to having seen him before. With little to go on, the village police turn to Scotland Yard for help.

When Inspector Ian Rutledge is sent from London to find answers, he is given few clues—a faded military tattoo on the victim’s arm and an unusual label in the collar of his shirt. They eventually lead him to the victim’s identity: Sam Milford. By all accounts, he was a good man and well-respected. Then, why is his death so mysterious? Looking for the truth, Rutledge uncovers a web of lies swirling around a suicidal woman, a child’s tragic fate, and another woman bent on protecting her past. But where among all the lies is the motive for murder?

To track a killer, Rutledge must retrace Milford’s last journey. Yet death seems to stalk his every move, and the truth seems to shift at every turn. Man or woman, this murderer stays in the shadows, and it will take desperate measures to lure him—or her—into the light.

“Each of Charles Todd’s engrossing novels about Scotland Yard Insp. Ian Rutledge, set post-World War I, puts a spotlight on often forgotten details about the Great War. It’s this minutia that illustrate the war’s effect on the characters and the region . . . Charles Todd are experts at subtly drawing parallels to 21st century concerns. The Great War ended more than a century ago but Ian’s personal issues and his investigations are relevant today.” — Florida Sun Sentinel

“A Fatal Lie provides an excellent book with which to walk into Rutledge’s pursuit of crime and determination to make things right . . . Those who value similar portrayals of place as character—as in Louise Penny’s Three Pines, for instance—will treasure A Fatal Lie and its Welsh backdrop. As a police procedural, also, the book’s persistent untangling of motive, means, and opportunity provides an instant classic for this mystery genre, along with an intriguing exploration of the heart’s effects on the mind.” — New York Journal of Books

“This is the type of classic-style mystery that we have grown to love from Charles Todd, and it never fails to deliver.” — BookReporter.com

"The melancholy tone that distinguishes the Rutledge series is a reminder that war never ends for the families and friends of lost loved ones. It just retreats into the shadows.” — New York Times Book Review

"This is a series, written by a mother-and-son team under the Charles Todd pseudonym, that shows no signs of slowing down. As always, this one combines crisp plotting with stylish prose. Ideal for historical-mystery devotees." — Booklist on A Divided Loyalty

A Game of Fear

A Pattern of Lies