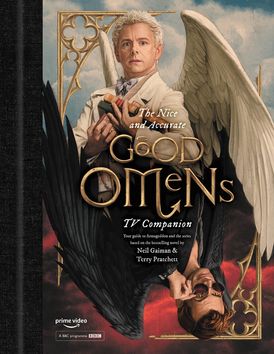 A stunning full-color, illustrated, behind-the-scenes guide to the Good Omens television series, adapted for the screen by Neil Gaiman himself and starring Michael Sheen and David Tennant.

Following the original novel’s chronological structure—from “the Beginning” to “End Times”—this official companion to the Good Omens television series, compiled by Matt Whyman, is a cornucopia of information about the show, its conception, and its creation. Offering deep and nuanced insight into Gaiman’s brilliantly reimagining of the Good Omens universe, The Nice and Accurate Good Omens TV Companion includes:

The must-have official companion guide to the Good Omens television series, Nice and Accurate TV Companion is a treasure trove of delights for fans of Good Omens, Neil Gaiman, and Terry Pratchett.

Matt Whyman has written books for teenagers and adults, including Man or Mouse, XY, and Superhuman. He is also a popular advice columnist and regularly appears on UK television and radio in this role. Mr. Whyman lives in the south of England with his wife and three daughters.

Other Works by Matt Whyman

Be More Sausage: Lifelong lessons from a small but mighty dog

The Unexpected Genius of Pigs