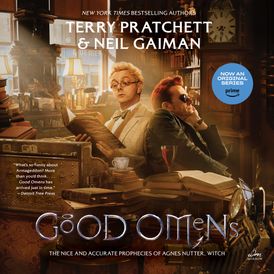 "Good Omens . . . is something like what would have happened if Thomas Pynchon, Tom Robbins and Don DeLillo had collaborated. Lots of literary inventiveness in the plotting and chunks of very good writing and characterization. It’s a wow. It would make one hell of a movie. Or a heavenly one. Take your pick."—Washington Post

According to The Nice and Accurate Prophecies of Agnes Nutter, Witch (the world's only completely accurate book of prophecies, written in 1655, before she exploded), the world will end on a Saturday. Next Saturday, in fact. Just before dinner.

So the armies of Good and Evil are amassing, Atlantis is rising, frogs are falling, tempers are flaring. Everything appears to be going according to Divine Plan. Except a somewhat fussy angel and a fast-living demon—both of whom have lived amongst Earth's mortals since The Beginning and have grown rather fond of the lifestyle—are not actually looking forward to the coming Rapture.

And someone seems to have misplaced the Antichrist . . .

Sir Terry Pratchett, the author of more than three dozen novels, is one of the world's best-selling and best-loved novelists writing in the English language. He wrote his first published story when he was 13 and his first novel, THE CARPET PEOPLE, when he was 17. His books have sold more than 85 million copies worldwide.
In addition to his phenomenal—and phenomenally popular—Discworld series for adults, Terry is the multi-award-winning author several children's books. These include the books of the BROMELIAD TRILOGY (HarperCollins, 2003), as well as THE WEE FREE MEN (HarperCollins, 2003), A HAT FULL OF SKY (HarperCollins, 2004), WINTERSMITH (HarperCollins, 2006), I SHALL WEAR MIDNIGHT (HarperCollins, 2010), NATION (HarperCollins, 2008)—a Michael L. Printz Honor Book, Boston Globe–Horn Book Award winner, and LA Times Book Prize for YA Literature winner—and DODGER (HarperCollins, 2012), for which he won his second Michael L. Printz Honor. He was awarded Britain's highest honor for a children's novel, the Carnegie Medal, for THE AMAZING MAURICE AND HIS EDUCATED RODENTS (HarperCollins, 2001). The recipient of several honorary doctorates, Sir Terry was knighted by Queen Elizabeth II in 2008 for his services to literature. And in 2011, he received the Margaret A. Edwards Award for Lasting Contributions to Young Adult Literature from the American Library Association.
He passed away in 2015 from Alzheimer's Disease. Find out more about Terry at terrypratchettbooks.com and the Facebook page https//www.facebook.com/pratchett (610K fans).