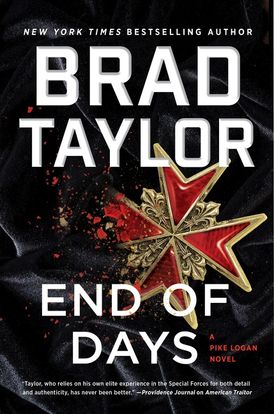 When a paragliding trip over the picturesque mountains of Switzerland results in the brutal murder of the former head of Israeli intelligence, Mossad brings in terrorist hunters Aaron and Shoshana to investigate. But they'll need help to find out who was behind the attack and what they’re planning next. Luckily, Aaron and Shoshana know exactly who to call.

Taskforce operators Pike Logan and Jennifer Cahill have been trapped in Charleston, South Carolina during COVID-19, so when Aaron and Shoshana show up on their doorstep with Israeli passports and a new mission, they jump at the chance to assist their friends. Some suspect that Keta’ib Hezbollah, an Iranian-funded militia group operating in Iraq, might be responsible for the “accidental” deaths of key members of the American and Israeli governments. But something isn’t adding up, and Pike, Jennifer, and the two Mossad operators are determined to find the real assassins before more people are cut down.

As they stumble upon the trail of a serial killer loose on the streets of Rome connected to the deaths and follow evidence leading to the exalted Knights of Malta, they must wade deep into the contentious religious and political fractures of Israel and the greater Middle East. It’s a dangerous world where fanatics and legitimate organizations exist side by side, and it’s up to the Taskforce to determine who is really pulling the strings. What they find could have disastrous consequences not only for them, but for the entire world…

“Pike Logan returns with a thundering force… Taylor’s own military experience and insights bleed onto the page, but in an honest and informative way that makes his story seem a little too real for comfort… Taylor [is] one of today’s finest storytellers.” - TheRealBookSpy.com on End of Days

“All action from start to finish…. Another solid novel in the series.” - RedCarpetCrash.com

“Lose yourself in American Traitor and find yourself remembering what makes this country so great.” - Veteran News Reporter

“Another solid Pike Logan novel that is all action from the time they get down under.” - Red Carpet Crash

“Brad Taylor has once again topped himself with this latest book. The action scenes are incredible… If you’re a fan of the action, thriller genre jump right in with this one.” - RedCarpetCrash.com

“[A] page-turning thriller...Taylor is one of today’s premiere authors writing about the world of special ops.” - Associated Press