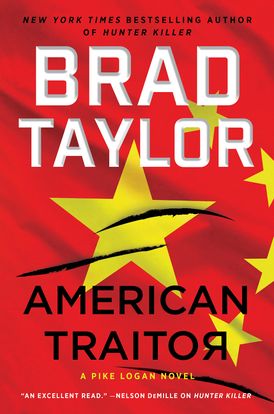 Pike Logan and Jennifer Cahill are enjoying a sunny vacation down under when they get disturbing news: their friend and colleague Clifford Delmonty is in serious trouble. While working as a contractor at an Australian F-35 facility, the former Taskforce member—callsign Dunkin—saw something he shouldn’t have, and now he’s on the run from Chinese agents.

Pike and Jennifer soon discover that Dunkin’s attackers are a dangerous link to a much larger scheme that could launch a full-on conflict between China and Taiwan. In its quest for dominance, China is determined to reclaim Taiwan—a pivotal ally the United States has sworn to protect. Pike learns that the Chinese have a devious plan to bait the island nation into all-out war by destabilizing the government and manipulating an artificial intelligence defense system.

As the threat reaches a boiling point, Pike alone realizes that what they’re seeing isn’t actually real. A soldier who has always been trained to fight and win, Pike must now track down and neutralize the missing man who holds the key. With the help of Jennifer, the Taskforce team, and a brave Taiwanese intelligence agent, he races to prevent a catastrophic conflict from consuming a whole region of the world.

"American Traitor is frighteningly realistic and will cause a lot of sleepless nights in Washington. Brad Taylor is the best action writer in the business today, and Pike Logan is the right hero for our time."  — William H. McRaven, Adm, U.S. Navy (Ret.) and author of Make Your Bed

“It is [Taylor’s] remarkable character work with a robust and memorable cast that is the true strength of the novel. The camaraderie of the battle-hardened operators…, their staunch loyalty... and their stalwart sense of shared duty ultimately make for a big-hearted novel, even amid its many pulse-pounding moments.” — Charleston Post & Courier

“Taylor, who relies on his own elite experience in the Special Forces for both detail and authenticity, has never been better, and neither has his literary doppelganger, Pike Logan.” — Providence Journal

“Taylor, a retired Special Forces lieutenant colonel, has a good grasp of the geopolitical backdrop of his stories, and this knowledge gives his books a solid layer of plausibility. The high-energy writing also helps sell the story and characters. This is a series that has earned its popularity.” — Booklist

“Lose yourself in American Traitor and find yourself remembering what makes this country so great.” — Veteran News Reporter

“Another solid Pike Logan novel that is all action from the time they get down under.” — Red Carpet Crash

“Brad Taylor knows his stuff. His new Pike Logan novel, Hunter Killer, has the gun metal ring of authenticity and the crisp writing of a military communique… It makes you pause and think while you’re being thoroughly and rapidly entertained. It’s an excellent read, and I greatly enjoyed it.” — Nelson DeMille

“Taylor continues to tell flawless stories with his stellar cast of characters... It’s amazing that after so many novels Taylor can still maintain the high-level quality and breathless action readers expect, while also getting better with each tale.” — Booklist (starred review)

"Taylor brings an unquestionable level of authenticity to his Pike Logan series... Throw in some former Israeli Mossad agents and the cast of elite operators along with the level of bone-crushing violence is almost overflowing. A surefire hit for those who like contemporary foreign affairs spiced heavily with page-turning action." — Kirkus Reviews

“A blistering, explosive read… Hunter Killer is one of the best in the series to date… An intriguing tale, full of twists, turns, explosions and fisticuffs. By the book’s conclusion, you will be wondering why all thrillers can’t be this good.” — Bookreporter.com

“ A car bomb meant for Pike [sets] the enraged Pike off on an unauthorized mission of vengeance… Aaron and Shoshana Bergman… raise the excitement level as they wreak havoc. A big surprise on the last page will please series fans.” — Publishers Weekly

“In what can only be described as Brad Taylor’s best novel to date, Hunter Killer has upped the stakes…With non-stop action, a driven plot, politics, and death, Brad Taylor has delivered a must-read Pike Logan novel that will be one of the best thrillers of 2020.”  — Lima Charlie

“Brad Taylor has once again topped himself with this latest book. The action scenes are incredible… If you’re a fan of the action, thriller genre jump right in with this one.” — Red Carpet Crash

Praise for Brad Taylor and the Pike Logan Series: “[A] page-turning thriller...Taylor is one of today’s premiere authors writing about the world of special ops.”
— Associated Press

“Taylor has already established himself as a master of special-ops thrillers, and this one will only add to his stellar reputation…Taylor adds human depth to his usually plot-driven novels, and the result is one of his best books to date.” — Booklist (starred review) on Daughter of War

“Former Delta Force officer Taylor relies on his familiarity with modern combat logistics to create credible characters and complex plots that pulse with intense intrigue, authenticity, and realism. Fans of military thrillers will enjoy how this narrative mirrors current events in the worldwide war on terror.” — Library Journal

“Fresh plot, great action, and Taylor clearly knows what he is writing about....When it comes to tactics and hardware, he is spot-on.” — Vince Flynn on All Necessary Force

“Mesmerizing. . . . Taylor adds his trademark rapid-fire pace and action scenes that rival the best of Brad Thor and Vince Flynn. A must-read for all hardcore thriller fans. — Providence Journal on Daughter of War

“As usual in the Pike Logan series, the spycraft and related technology are fascinating, the dialogue crackles, and all the players are operating in an international sea of moral ambiguity. Recommend Pike Logan to readers who like their spies tough, smart, and bordering on superhuman.” — Booklist

“Taylor clearly has the qualifications to provide a military thriller with realistic details, and he does just that in this latest addition to the Pike Logan series....a fast-paced thriller. A believable story with the kind of interesting details that keep the pages turning.” — Kirkus Reviews on Daughter of War

“Anyone who was a fan of the late legendary author Vince Flynn should read Taylor, the heir apparent to the Mitch Rapp series.” — Crimespree Magazine on Ghosts of War

“Comparisons to Vince Flynn and Brad Thor are expected and not inaccurate, but Taylor is now in a class by himself.” — Booklist (starred review) on The Forgotten Soldier

“This is the Pike Logan fans have been wanting to see, and by turning his hero loose, Hunter Killer becomes Brad Taylor’s most stunning novel to date. The gauntlet gets thrown down early in 2020, with Taylor delivering the thriller other writers will spend the year trying to top.”  — The Real Book Spy

“When it comes to action thrillers, only a handful of writers can match the storytelling skills of Brad Taylor… You’ll be so hooked you won’t want to put it down… Edge-of-your-seat compelling.” — Jerseysbest.com