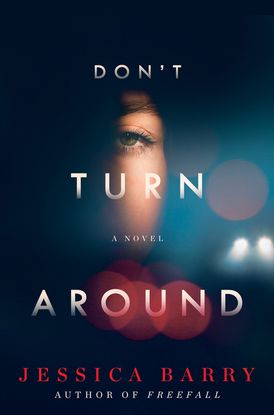 The riveting follow up to Jessica Barry’s debut Freefall—a controversial, of-the-moment thriller about two women fighting for their right to live.

Midnight. Cait Monaghan and Rebecca McRae are on a desolate road that slices through the New Mexican desert. They've never met before tonight.  Both have secrets to protect. Both of their lives are in danger.

When a truck pulls up fast behind them, they assume it's punk teenagers or run-of-the-mill road rage, but it soon becomes clear that whoever is driving the truck is hunting them for sport—and they are out to draw blood.

As the miles unspool and the dangers mount, the pasts they've worked so hard to keep buried have come back to haunt them.  Someone wants one of them dead. But which one?  And given the lives the two women have been leading, that someone could be almost anyone.

If Cait and Rebecca are going to survive, they'll have to learn to trust one another—and themselves. But trust is a costly business, and they’ve both paid the price before. . . .

“A novel like razor-wire: elegant, sinister, bristling with hooks. Who is the predator — and who is the prey? Is the danger behind you, a pair of headlights on that lonely highway… or right beside you, gripping the wheel with white knuckles? As you race down the roads that slice across Jessica Barry’s American Southwest, you might catch a glimpse of the desperate fugitives from No Country for Old Men, or the wayward college kids of Joyride, — but Don’t Turn Around is very much an original vehicle, part chase thriller, part psychological suspense, altogether audacious, wholly ingenious.” - AJ Finn, author of #1 New York Times bestseller The Woman in the Window

"Jessica Barry has written a grab-you-by-the-throat novel of suspense that follows the trail of two women pushed to the extreme. Don’t Turn Around is the female-driven thriller you've been waiting for. " - Danielle Trussoni, New York Times bestselling author of Angelology

Praise for Freefall by Jessica Barry: “Jessica Barry’s Freefall is not only an enthralling, impossible-to-put down mystery that keeps the pages flying, but it is also a gorgeous, resonant tale of a mother’s unconditional love for her daughter. I could not recommend this more!” - Aimee Molloy, New York Times bestselling author of The Perfect Mother

“Freefall is an electric mix of action and emotional drama that never stops, never slows down.” - Liv Constantine, national bestselling author of The Last Mrs. Parrish

&#8220A gripping page-turner. Freefall is exactly what a great thriller should be.’ - Renee Knight, international bestselling author of Disclaimer

“A brilliant, addictive page-turner with sharply drawn, dueling mother-daughter narrators who you will root for and empathize with as they struggle to survive their harrowing present, come to terms with a troubled past and fight to find their way home.”  - Kimberly McCreight, New York Times bestselling author of Reconstructing Amelia and Where They Found Her