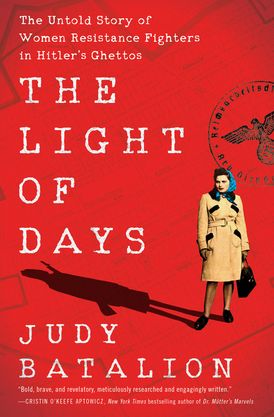 Witnesses to the brutal murder of their families and neighbors and the violent destruction of their communities, a cadre of Jewish women in Poland—some still in their teens—helped transform the Jewish youth groups into resistance cells to fight the Nazis. With courage, guile, and nerves of steel, these “ghetto girls” paid off Gestapo guards, hid revolvers in loaves of bread and jars of marmalade, and helped build systems of underground bunkers. They flirted with German soldiers, bribed them with wine, whiskey, and home cooking, used their Aryan looks to seduce them, and shot and killed them. They bombed German train lines and blew up a town’s water supply. They also nursed the sick, taught children, and hid families.

"Written with passion…Batalion’s research is prodigious, and her dedication to her story obvious and moving." — Boston Globe

"Thrilling, devastating... tells of an underground network of young Jewish women in Poland who resisted the Nazis by engaging in smuggling, sabotage, and even armed defense. Their courageous deeds, largely forgotten until now, are astounding." — Christian Science Monitor

“Hard to put down…The Light of Days is not a story but a multi-layered epic, one that rewrites the Holocaust. Drama abounds and the characters are deeply engaging. Required reading.” — The Jerusalem Post

"The Light of Days rescues a long-neglected aspect of history from oblivion, and puts paid to the idea of Jewish, especially female, passivity during the Holocaust. It is uncompromising, written with passion--and it preserves truly significant knowledge." — The Times Literary Supplement

“Be not afraid. Judy Batalion brings to life the story of young women who had mindboggling valor. Super heroes. They fought the Nazis. With nerves of steel. You don’t have to fight the Nazis (we hope). But you do have to be courageous and honorable. (Well, most of the time).  And you will be. There are inspirational books that change your life. And this is one of them.” — Maira Kalman, author of And the Pursuit of Happiness

"This is a powerful and necessary book. I’m so grateful to Judy Batalion for bringing us these women in all their fierce intelligence and courage. It’s astonishing that their stories haven’t been widely heard until now—but Batalion’s rare combination of skills has brought them to vibrant life. This is history we’ve needed to hear." — Rachel Kadish, author of The Weight of Ink

"Judy Batalion has told the largely forgotten stories of the girl couriers, smugglers and fighters who formed the nerve center of Jewish resistance in occupied Poland. A breathtaking, dazzling work of historical resurrection" — Molly Crabapple, author of Drawing Blood and Brothers of the Gun (with Marwan Hisham)

“Resounding history of Jewish women who fought the German invaders in World War II. In a vigorous narrative that draws on interviews, diaries, and other sources, Batalion delivers an objective view of past events that are too quickly being forgotten—and a story much in need of telling.”
— Kirkus (Starred Review)

“A remarkable portrait of young Jewish women who fought in the resistance during WWII. . . pays vivid tribute to `the breadth and scope of female courage.'" — Publishers Weekly