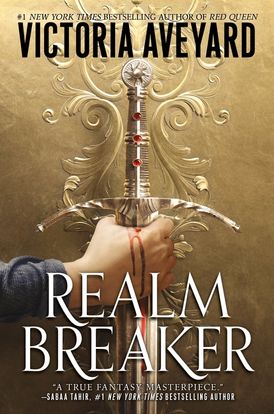 Irresistibly action-packed and full of lethal surprises, this stunning new fantasy series from Victoria Aveyard, #1 New York Times bestselling author of the Red Queen series, begins where hope is lost and asks: When the heroes have fallen, who will take up the sword?

A strange darkness grows in Allward.

Even Corayne an-Amarat can feel it, tucked away in her small town at the edge of the sea.

She soon discovers the truth: She is the last of an ancient lineage—and the last hope to save the world from destruction. But she won’t be alone. Even as darkness falls, she is joined by a band of unlikely companions:

Together they stand against a vicious opponent, invincible and determined to burn all kingdoms to ash, and an army unlike anything the realm has ever witnessed.

"The entire time I was reading REALM BREAKER, I wanted one thing: for the book to never end. It is classic yet groundbreaking, romantic yet edgy, a rollicking adventure that carries you along at a relentless pace. A true fantasy masterpiece."  — Sabaa Tahir, #1 New York Times bestselling author of the An Ember in the Ashes series.

An enthralling adventure, a richly imagined world, and the most impossible odds combine to make Realm Breaker an addictive, tightly-paced gem of a book. Readers will delight in Aveyard’s bewitching new beginning, all at once epic in scope and intimate in detail. It’s the adventure I was desperate to go on as a teenager and the kind of story I eagerly devour as an adult. — Emma Theriault, author of Rebel Rose

Praise for the Red Queen series:     “Aveyard’s “little lightning girl” remains a relatable and deeply flawed heroine... Aveyard adeptly sets the scene for a fourth book to follow, amid a war not yet won.” — Publishers Weekly

“Another devastating cliff-hanger ending will leave readers hungry for the final volume.” — Booklist

“[Aveyard] sets her audience up for a gaspworthy twist that reconfigures nearly every character’s role and leaves Mare with no one to trust but herself... This blend of fantasy and dystopia will be an unexpected and worthy addition to many genre fans’ reading list.”

— Bulletin of the Center for Children’s Books

“Fascinating world building... Readers will be intrigued by a world that reflects today’s troubling issues concerning ethnic inequality, unfair distribution of wealth, pollution, warfare, political corruption, and the frightening power of the media.”