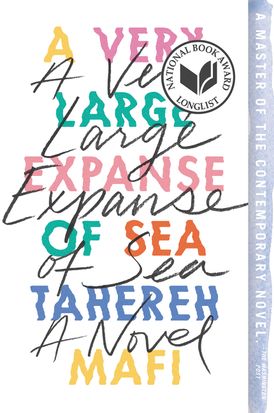 From the New York Times and USA Today bestselling author of the Shatter Me series comes a powerful, heartrending contemporary novel about fear, first love, and the devastating impact of prejudice.

“A raw yet astoundingly elegant examination of identity, loneliness and family that is unflinching in its honesty and power. Tahereh Mafi holds nothing back—and the reader is better for it.” - Sabaa Tahir, #1 New York Times bestselling author of the Ember in the Ashes series

“A Very Large Expanse of Sea reads like a beautiful heart—one that shines and aches and yearns, and above all else, one that loves fiercely against all odds. A transcendent story about truth, love, and finding joy.” - Marie Lu, #1 New York Times bestselling author of the Warcross series

“Tahereh Mafi, known for her fantasy and dystopian novels, proves a master of the contemporary realistic novel. Even as the fraught love story drives the short chapters to a surprising close, Mafi weaves in moments of camaraderie and joy.” - Washington Post

★“Mafi tackles the life of an American Muslim teenager in the wake of 9/11 in this visceral, honest novel. Shirin’s captivating story opens a window onto a different narrative than the one typically dominating airwaves after 9/11. Rich characters, incisive writing, and a powerful story will thrill readers.” - Booklist (starred review)

★ “[Mafi’s] writing is nuanced and smart. Shirin and Ocean’s interactions are palpable, and the discussions and exploration of what it means to be a Muslim in politically charged America will resonate with many teens and will be enlightening for some.” - School Library Journal (starred review)

★ “Mafi gives vivid voice to an underrepresented audience in this story. The teens’ rich personalities, desires, powerful emotions and struggles come together to form a memorable work. An outstanding contemporary novel, A Very Large Expanse of Sea is a realistic love story that provides a much-needed perspective.” - Shelf Awareness (starred review)

“A contemporary love story with a heartbreakingly realistic portrait of one post-9/11 Muslim life. Mafi openly addresses many common misconceptions about Islam and what it means to be a woman of color in the face of racism, showing how differences can be applauded, not feared.” - Publishers Weekly

“Holds a mirror up to the reality of religious bigotry. A portrait of a strong Muslim teen girl who defies stereotypes. Shirin insists on her right to approach life on her own clear-eyed terms, granting compassion to the deserving and an education to those who need it.” - Bulletin of the Center for Children’s Books

“A Very Large Expanse of Sea is the love story you need to read next.” - TeenVogue

Tahereh Mafi is the <i>New York Times</i> bestselling author of the Shatter Me series which has been published in over 30 languages around the world. She is also the author of <i>A Very Large Expanse of Sea</i> which has received rave reviews. She was born in a small city somewhere in Connecticut and currently resides in Santa Monica, California, with her husband, Ransom Riggs, fellow bestselling author of <i>Miss Peregrine's Home For Peculiar Children</i>, and their young daughter. She can usually be found over caffeinated and stuck in a book. You can find her online at @TaherehMafi.