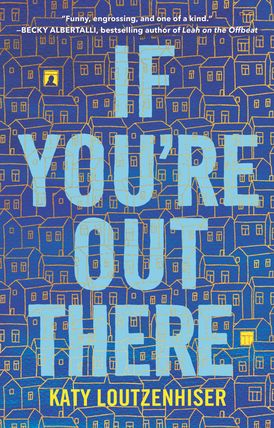 “Funny, engrossing, and one-of-a-kind. If You’re Out There completely swept me away.” —Becky Albertalli, New York Times bestselling author of Leah on the Offbeat

Part whip-smart suspense tale, part touching story of friendship, this is an extraordinary debut about a determined teen trying to solve a mystery no one else believes in.

After Zan’s best friend moves to California, she is baffled and crushed when Priya suddenly ghosts. Worse, Priya’s social media has turned into a stream of ungrammatical posts chronicling a sunny, vapid new life that doesn’t sound like her at all.

Everyone tells Zan not to be an idiot: Let Priya do her reinvention thing and move on. But until Zan hears Priya say it, she won’t be able to admit that their friendship is finished.

It’s only when she meets Logan, the compelling new guy in Spanish class, that Zan begins to open up about her sadness, her insecurity, her sense of total betrayal. And he’s just as willing as she is to throw himself into the investigation when everyone else thinks her suspicions are crazy.

“Funny, engrossing, and one-of-a-kind. If You’re Out There completely swept me away.” — Becky Albertalli, #1 New York Times bestselling author of Leah on the Offbeat

“Part Holmesian mystery, part love story, and funny as hell, If You’re Out There is a true exploration of deep-rooted friendship that unfolds with pitch-perfect pacing. It’s my new obsession.” — David Arnold, bestselling author of The Strange Fascinations of Noah Hypnotik

“This fast-paced debut features a smart, deeply insecure heroine and is as much an examination of friendship as it is a light thriller. A mystery for the digital age.” — ALA Booklist

“Loutzenhiser’s debut is an engaging puzzler anchored by well-realized and endearing characters with diverse family structures. A light, charming mystery and a heartfelt ode to female friendship.” — Kirkus Reviews 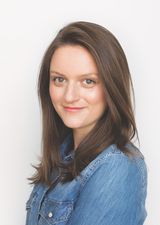 Katy Loutzenhiser is a graduate of Bowdoin College who trained in comedy with the iO and Second City theaters in Chicago. Katy made her YA debut with If You’re Out There and lives with her husband in Brooklyn, New York. Visit her online at www.katyloutzenhiser.com.

Other Works by Katy Loutzenhiser