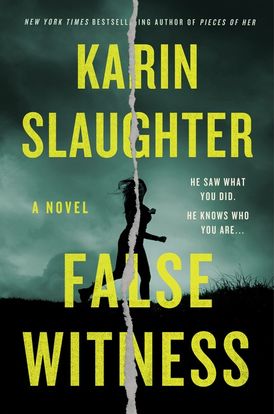 He saw what you did.

He knows who you are…

From the New York Times bestselling author of Pieces of Her and The Silent Wife, an electrifying standalone thriller.

Leigh Collier has worked hard to build what looks like a normal life.  She has a good job as a defense attorney, a daughter doing well in school, and even her divorce is relatively civilized—her life is just as unremarkable as she'd always hoped it would be.

HIDES A DEVASTATING PAST ...

But Leigh's ordinary life masks a childhood which was far from average … a childhood tarnished by secrets, broken by betrayal, and finally torn apart by a devastating act of violence.

BUT NOW THE PAST IS CATCHING UP …

Then a case lands on her desk—defending a wealthy man accused of rape.  It's the highest profile case she's ever been given—a case which could transform her career, if she wins.  But when she meets the accused, she realizes that it's no coincidence that he's chosen her as his attorney.  She knows him.  And he knows her.  More to the point, he knows what happened twenty years ago, and why Leigh has spent two decades running.

AND TIME IS RUNNING OUT.

If she can't get him acquitted, she'll lose much more than the case.  The only person who can help her is her younger, estranged sister Callie, the last person Leigh would ever want to ask for help.  But suddenly she has no choice...

“Slaughter’s eye for detail and truth are unmatched.”  - Gillian Flynn

“Her talent is the equivalent of an Edgar Allan Poe or a Nathaniel Hawthorne . . . An exemplary storyteller, weaving her words with skill and intelligence. She will be recognized as one of the great talents of the 21st century and will hold an honored place in the realm of world literature.” - The Huffington Post

“[The Last Widow] does what all great Slaughter books do: keeps you on the edge of your seat. It’s a chilling whodunit for our times.” - Parade on The Last Widow

“Slaughter adds depth to her best-selling series with the investigations of old and current cases, while also advancing the key personal relationship. Another slam dunk.” - Booklist (starred review) on The Silent Wife

"The emotionally sophisticated characters work through the brutality of their jobs in this dynamic psychological thriller and police procedural that will please readers of Slaughter’s “Grant County” series. For fans of Meg Gardiner, David Baldacci, and Carrie Smith." - Library Journal on The Silent Wife

“All of Slaughter’s books . . . are satisfyingly surprising and plausible, but it’s Slaughter’s prodigious gifts of characterization that make her stand out among thriller writers.”

“Slaughter’s work is like a professional athlete coming to the playground to show the kids how it’s done. With her themes, tensions and metaphors, she has a talent for classic literature that is often missing in recent fiction.” - RT Book Reviews

Karin Slaughter is one of the world’s most popular and acclaimed storytellers. Published in 120 countries with more than 35 million copies sold across the globe, her twenty novels include the Grant County and Will Trent books, as well as the Edgar-nominated Cop Town and the instant New York Times bestselling novels Pretty Girls, The Good Daughter, Pieces of Her, and The Last Widow. Slaughter is the founder of the Save the Libraries project—a nonprofit organization established to support libraries and library programming. A native of Georgia, she lives in Atlanta. Her standalone novel Pieces of Her is in production with Netflix, starring Toni Collette, and the Grant County and Will Trent series are in development for television.