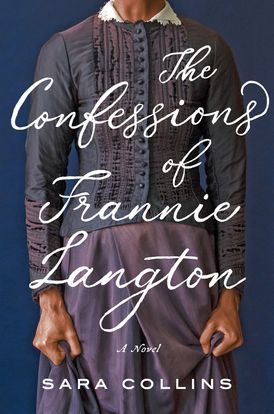 One of BOOKRIOT and POPSUGAR's Best Books of 2019

“A startling, compelling historical debut novel. . . should be on top of your vacation reading pile.” -The Washington Post

A servant and former slave is accused of murdering her employer and his wife in this astonishing historical thriller that moves from a Jamaican sugar plantation to the fetid streets of Georgian London—a remarkable literary debut with echoes of Alias Grace, The Underground Railroad, and The Paying Guests.

Though her testimony may seal her conviction, the truth will unmask the perpetrators of crimes far beyond murder and indict the whole of English society itself.

The Confessions of Frannie Langton is a breathtaking debut: a murder mystery that travels across the Atlantic and through the darkest channels of history. A brilliant, searing depiction of race, class, and oppression that penetrates the skin and sears the soul, it is the story of a woman of her own making in a world that would see her unmade.

“Collins’s propulsive spine-tingler uses the conventions of historical fiction but infuses the genre with edgy beauty. . . . In her deft hands, defiant Frannie summons courage and cunning to tell a story of colonialism, racism, and the yearning to connect.” - O: The Oprah Magazine, “The Best Books by Women of Summer 2019”