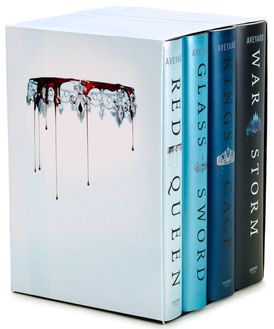 With every book in Victoria Aveyard’s blockbuster Red Queen quartet in one box set, you can follow this series from the spark that began everything, all the way to the electrifying conclusion.

Praise for the Red Queen series: “Aveyard’s ‘little lightning girl’ remains a relatable and deeply flawed heroine... Aveyard adeptly sets the scene for a fourth book to follow, amid a war not yet won.” — Publishers Weekly

Praise for the Red Queen series: “Aveyard certainly has a flair for the dramatic, which teens will eat up. The action hits the ground running and doesn’t stop until after the last page is turned.” — School Library Journal

Praise for the Red Queen series: “Fast-paced and action packed, Glass Sword is compelling and strong, guaranteed to gratify anxious readers of the series and fans of dystopian and fantasy literature.” — Voice of Youth Advocates (VOYA)

Praise for the Red Queen series: “A volatile world with a dynamic heroine.” — Booklist

Praise for the Red Queen series: “This blend of fantasy and dystopia will be an unexpected and worthy addition to many genre fans’ reading list.” — Bulletin of the Center for Children’s Books