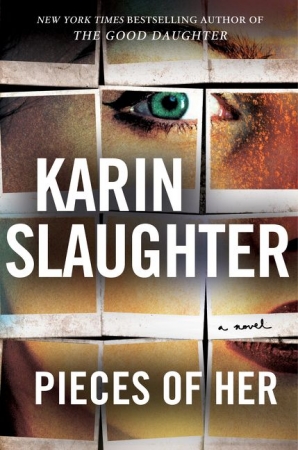 The #1 internationally bestselling author returns with a new novel in the vein of the New York Times bestsellers Pretty Girls and The Good Daughter—a story even more electrifying, provocative, and suspenseful than anything she's written before.

What if the person you thought you knew best turns out to be someone you never knew at all . . . ?

But all that changes when a Saturday afternoon trip to the mall explodes into violence and Andrea suddenly sees a completely different side to Laura. Because it turns out that before Laura was Laura, she was someone completely different. For nearly thirty years she's been hiding from her previous identity, lying low in the hope that no one will ever find her. But now she's been exposed, and nothing will ever be the same again.

Twenty-four hours later Laura is in the hospital, shot by an intruder who's spent thirty years trying to track her down and discover what she knows. Andrea is on a desperate journey following the breadcrumbs of her mother's past. And if she can't uncover the secrets hidden there, there may be no future for either one of them. . . .

“A propulsive, high-stakes thriller rife with intrigue and suspense.” - USA Today on Pieces of Her

“All of Slaughter’s books... are satisfyingly surprising and plausible, but it’s Slaughter’s prodigious gifts of characterization that make her stand out among thriller writers.... Slaughter’s satirical touches are as deft as her grimmer renditions of real life.” - Washington Post

“[Slaughter’s] talent for writing convincingly flawed yet sympathetic characters is in high relief here... Readers will find themselves totally immersed in the suspenseful, alternating story lines and won’t want either of them to end.”
- Booklist (starred review) on Pieces of Her

“The ever-popular crime novelist is back with another pulse-pounding standalone, this one considering the twisted relationship between a mother and a daughter after the latter realizes she may not know the woman who gave birth to her at all.” - Entertainment Weekly on Pieces of Her, “20 New Books to Read in August”

“Enter the world of Karin Slaughter. Just be forewarned, there’s no going back.” - Lisa Gardner

“Breathtaking…. Fiction doesn’t get any better than this.” - Jeffery Deaver, New York Times-bestselling author of Solitude Creek and The Skin Collector

“It’s a compelling story that swept me along, unable to resist and unable to stop reading.” - Suspense Magazine on Pieces of Her

“With an intrigue and suspense-filled plot, Slaughter’s well-crafted, tense, and exhilarating story will keep readers on the edge of their seats.” - Library Journal on Pieces of Her

“This is a great writer at the peak of her powers. Karin Slaughter is at her nail biting, heart stopping, emotionally draining best.” - Peter James on The Good Daughter

“A stunning family tragedy and a hold-your-breath pedal-to-the-metal thriller magically blended by Karin Slaughter’s trademark passion, intensity, and humanity. Certain to be a book of the year.” - Lee Child on Pretty Girls

“Searing, searching, soulful: a major achievement from a writer of extraordinary talents. Every Karin Slaughter novel is a cause for celebration—but simply put, Pretty Girls is the finest novel of her career.” - Kathy Reichs, #1 New York Times-bestselling author of Speaking in Bones, on Pretty Girls

“A hell-raising thriller . . . a genuinely exciting narrative driven by strong-willed female characters who can?t wait around until the boys shake the lead out of their shoes.” - New York Times Book Review on Pretty Girls

“But the success of writers like Gillian Flynn and Paula Hawkins and Karin Slaughter isn’t just due to the fact that they’re women... It’s about writers comprehending why women are so compelled by stories about brutal, graphic violence in the first place.” - The Atlantic

“It’s a top-notch story that will keep the reader engrossed from start to finish. Karin Slaughter is a fabulous writer and one thing I love with her books is she has a way of creating characters that you care about.” - Freshfiction.com

Karin Slaughter is one of the world’s most popular and acclaimed storytellers. Published in 120 countries with more than 40 million copies sold across the globe, her twenty-one novels include the Grant County and Will Trent books, as well as the Edgar-nominated Cop Town and the instant New York Times bestselling stand-alone novels Pretty Girls, The Good Daughter, and Pieces of Her. Slaughter is the founder of the Save the Libraries project—a nonprofit organization established to support libraries and library programming. A native of Georgia, she lives in Atlanta. Her standalone novel Pieces of Her is in production with Netflix, starring Toni Collette, and the Grant County and Will Trent series are in development for television.