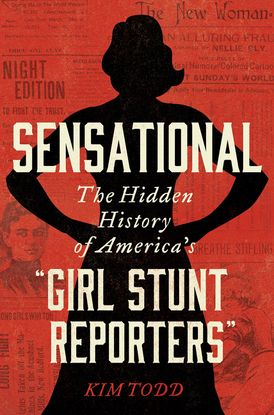 "A gripping, flawlessly researched, and overdue portrait of America’s trailblazing female journalists. Kim Todd has restored these long-forgotten mavericks to their rightful place in American history."—Abbott Kahler, author (as Karen Abbott) of The Ghosts of Eden Park and Liar, Temptress, Soldier, Spy

A vivid social history that brings to light the “girl stunt reporters” of the Gilded Age who went undercover to expose corruption and abuse in America, and redefined what it meant to be a woman and a journalist—pioneers whose influence continues to be felt today.

In the waning years of the nineteenth century, women journalists across the United States risked reputation and their own safety to expose the hazardous conditions under which many Americans lived and worked. In various disguises, they stole into sewing factories to report on child labor, fainted in the streets to test public hospital treatment, posed as lobbyists to reveal corrupt politicians. Inventive writers whose in-depth narratives made headlines for weeks at a stretch, these “girl stunt reporters” changed laws, helped launch a labor movement, championed women’s rights, and redefined journalism for the modern age.

The 1880s and 1890s witnessed a revolution in journalism as publisher titans like Hearst and Pulitzer used weapons of innovation and scandal to battle it out for market share. As they sought new ways to draw readers in, they found their answer in young women flooding into cities to seek their fortunes. When Nellie Bly went undercover into Blackwell’s Insane Asylum for Women and emerged with a scathing indictment of what she found there, the resulting sensation created opportunity for a whole new wave of writers. In a time of few jobs and few rights for women, here was a path to lives of excitement and meaning.

After only a decade of headlines and fame, though, these trailblazers faced a vicious public backlash. Accused of practicing “yellow journalism,” their popularity waned until “stunt reporter” became a badge of shame. But their influence on the field of journalism would arc across a century, from the Progressive Era “muckraking” of the 1900s to the personal “New Journalism” of the 1960s and ’70s, to the “immersion journalism” and “creative nonfiction” of today. Bold and unconventional, these writers changed how people would tell stories forever.

“Todd’s resurrection of these courageous reporters is fascinating because the women and their stories are so vibrant. With acerbic wit, the author also makes a larger point. . . . It was the male muckrakers who are credited as the progenitors of gritty, detailed narratives told in the first person. Ms. Todd makes a good case that more credit is due to those early 'girl stunt reporters.'" — Wall Street Journal

"Todd has great affection for these women and celebrates their triumphs while placing them in historical context. And she argues trenchantly against long-accepted accounts of the origins of creative nonfiction, later to be known as New Journalism." — Air Mail

"These women came from a variety of backgrounds and were often drawn from the working class: journalism was their way out of having to be the factory girl or the maid they would pretend to be for stories. Today fewer journalists seek undercover scoops. Nor do editors hire reporters just for showing moxie, rather than a journalism-school diploma. More’s the pity." — The Spectator

"With textured analysis and an instinct for salient details, Todd emulates her pioneering heroines to offer multidimensional examples of the revolutionary contributions women of this era made to journalism." — Booklist

“At the height of the turn-of-the century newspaper wars, these "girl reporters" did their work for the same reasons men did--a keen sense of social justice, along with a taste for adventure and writerly fame. Their gender (and the anonymity it provided) often gave them a leg up in reporting, drew in hordes of excited readers--and, of course, held back their careers and suppressed their pay. Sensational is an illuminating look at female pioneers working at a key moment in American journalism.” — Liza Mundy, author of Code Girls: The Untold Story of the American Women Code Breakers of World War II

"Todd’s comprehensive account rightly sheds light on the many women who changed the face of journalism and helped jump-start the newspaper industry. Her accessible writing draws in readers from the first page." — Library Journal

“An engaging and enlightening portrait of trailblazers who ‘challenged…views of what a woman should be.’”  — Kirkus Reviews

"Todd casts a sprawling net, rescuing some of her profile subjects from obscurity and adding depth to the popular portrayals of others. This well-researched history makes clear the crucial role female reporters played in pioneering investigate journalism and boosting progressive reform movements." — Publishers Weekly

"Sensational is a gripping, flawlessly researched, and overdue portrait of America’s trailblazing female journalists. These daring, intrepid “girl reporters” defied incredible odds to both expose societal ills and entertain readers with their thrilling adventures—going, in many cases, where no man had gone before. In this important and immensely readable book, Kim Todd has restored these long-forgotten mavericks to their rightful place in American history." — Abbott Kahler, author (as Karen Abbott) of The Ghosts of Eden Park

“Kim Todd's spirited tour of Gilded Age "girl reporters" casts a welcome light on these trailblazing women determined to make their mark.  The beam is even keener on American journalism shouldering its way toward our own media-drenched world.  Nellie Bly, a heroine here, has never faded from cultural memory, but Todd presents a whole sisterhood of intrepid  correspondents.”   — Patricia Hampl, author of The Art of the Wasted Day and The Florist's Daughter

"Kim Todd’s awe-inspiring Sensational provides long-overdue recognition to a remarkable cadre of women journalists. Todd masterfully reconstructs the lives and work of these female pioneers of investigative reporting who went undercover at enormous personal risk to publish frontpage exposes of the brutal treatment of workers, patients, orphans, and other defenseless members of society. Now, thanks to Todd’s assiduous research and crisp writing, these courageous women will no longer be the hidden figures of journalism history." — James McGrath Morris, author of Pulitzer: A Life in Politics, Print, and Power

“In Todd’s able hands, we learn about these daring young women, about their lives and times, their work, their editors and mentors, their torments and loves, their interconnections, and, best of all, their real legacy. These young reporters demonstrated the power of personal narrative to rivet public attention on society’s seen and unseen ills and incite the quest for remedy--a tradition that endures today.”  — Brooke Kroeger, author of Nellie Bly: Daredevil. Reporter. Feminist

"Sensational brings the stories and battles of Gilded Age newspaperwomen to gritty, effervescent life. The greatest achievements of undercover journalism—public health reforms, labor protections, and heightened awareness of our flawed criminal justice system—can be traced back to this fascinating group of writers, whose close-held dreams and professional compromises feel all too familiar today." — Stephanie Gorton, author of Citizen Reporters

"The perfect read for these crazy days. I was transfixed and inspired by the stories of women who dared to cross boundaries and report the truth. I plan to send copies to my mom, sisters, and brilliant female friends--Sensational, The Hidden History of America's Girl Stunt Reporters gave me hope and reminded me, as Todd writes, of 'life's rich possibility.' — Amanda Ward, author of The Jetsetters

Kim Todd is the award-winning author of several books, including Sensational: The Hidden History of America's “Girl Stunt Reporters”, Chrysalis: Maria Sibylla Merian and the Secrets of Metamorphosis, and Tinkering with Eden: A Natural History of Exotic Species in America, winner of the PEN/Jerard Award and the Sigurd Olson Nature Writing Award. Her essays and articles have appeared Smithsonian, Salon, Sierra Magazine, Orion, and Best American Science and Nature Writing anthologies, among other publications. She is a member of the MFA faculty at the University of Minnesota and lives in Minneapolis with her family.

Other Works by Kim Todd