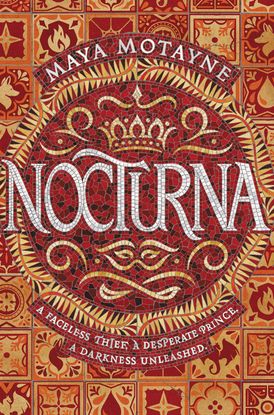 The first in a sweeping and epic debut fantasy trilogy—set in a stunning Latinx-inspired world—about a face-changing thief and a risk-taking prince who must team up to defeat a powerful evil they accidentally unleashed. Perfect for fans of Tomi Adeyemi, Leigh Bardugo, and V. E. Schwab.

To Finn Voy, magic is two things: a knife to hold under the chin of anyone who crosses her…and a disguise she shrugs on as easily as others pull on cloaks.

As a talented faceshifter, it’s been years since Finn has seen her own face, and that’s exactly how she likes it. But when Finn gets caught by a powerful mobster, she’s forced into an impossible mission: steal a legendary treasure from Castallan’s royal palace or be stripped of her magic forever.

After the murder of his older brother, Prince Alfehr is first in line for the Castallan throne. But Alfie can’t help but feel that he will never live up to his brother’s legacy. Riddled with grief, Alfie is obsessed with finding a way to bring his brother back, even if it means dabbling in forbidden magic.

But when Finn and Alfie’s fates collide, they accidentally unlock a terrible, ancient power—which, if not contained, will devour the world. And with Castallan’s fate in their hands, Alfie and Finn must race to vanquish what they have unleashed, even if it means facing the deepest darkness in their pasts.

“What makes Motayne’s debut title singular and special is that her kingdom is Latinx, with brown-skinned, curly-haired people and Spanish sprinkled throughout…. Cinematic, plentiful action as well as intriguing protagonists will pull many a fantasy reader, and the richly detailed world will keep them reading.” - ALA Booklist

“This fantasy set in a Latinx kingdom explores the lasting effects of childhood trauma, the destructive potential of grief, and the redemptive power of love…. the stakes are high, Finn and Alfie’s reluctant attraction rings true, and a gratifying conclusion paves the way for book two.”
- Publishers Weekly

“This searing, magical Latinx-inspired fantasy pulled me in from the first page and did not let me go. I loved adventuring with brave Alfie and brash Finn, and I held my breath until the end. Nocturna is a magnificent debut, powerful and true.” - Julie C. Dao, author of Forest of a Thousand Lanterns

“Nocturna is an exhilarating adventure, bursting with lively, inventive magic and characters who charmed me the instant they appeared on the page. If you want to get swept up in a story, pick this one.” - New York Times bestselling author Margaret Rogerson

“Fantasy fans will embrace the creative worldbuilding and welcome these flawed and multi-layered characters into their hearts.” - Cinda Williams Chima, New York Times bestselling author of the Shattered Realms series

Maya Motayne decided to be a writer when she was four years old and hasn’t stopped writing since. Her first novel, Nocturna, was a Los Angeles Times bestseller as well as a #1 Sunday Times bestseller. Maya lives in New York City, where she pursues her passions of petting as many dogs as possible and buying purses based on whether they can fit a big book in them. To learn more about Maya, visit her website at mayamotayne.com.

Other Works by Maya Motayne