In a Class by Himself and Strikes Again 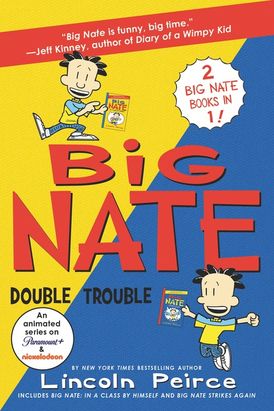 In a Class by Himself and Strikes Again

Soon to be an animated series from Nickelodeon!

A new paperback bind-up of the first two novels in the New York Times bestselling Big Nate series: Big Nate: In a Class By Himself and Big Nate Strikes Again. This bind-up is the perfect introduction to the classic series.

Big Nate is bigger than ever in this super-cool bind-up of the first two books in the New York Times bestselling Big Nate series.

In Big Nate: In a Class by Himself, Nate knows he’s destined for great things. But things don’t always go your way just because you’re awesome. When his whole life seems to be going wrong, can Nate prove that he’s really destined for greatness?

In Big Nate Strikes Again, Nate is stuck with Gina, his all-time enemy, in a class project AND on his fleeceball team right when Nate is set to win his first championship. Even though Gina’s sure to ruin everything, can Nate figure out how to win the game?

For fans of the hilarious Diary of a Wimpy Kid series: Get ready to meet Big Nate, unofficial king of detention and definitely not the teacher’s pet.

Praise for BIG NATE: IN A CLASS BY HIMSELF: “Though Nate may not achieve the fame he seeks with his classmates, this sharp-witted and unflappable protagonist just might find it with readers.” - Publishers Weekly

Praise for BIG NATE: IN A CLASS BY HIMSELF: “Thank goodness sequels are planned!” - Kirkus Reviews

Praise for BIG NATE: IN A CLASS BY HIMSELF: “Laugh-out-loud!” - School Library Journal

Praise for BIG NATE: IN A CLASS BY HIMSELF: “Nate’s persistent good cheer and moxie make him a likeable new proxy for young misfits.” - Booklist

Praise for BIG NATE: IN A CLASS BY HIMSELF: “What carries the day are the zany illustrations and unflagging enthusiasm of Nate himself.” - Bulletin of the Center for Children’s Books


Praise for BIG NATE STRIKES AGAIN: “The millions of Wimpy Kid fans will be thrilled to find another cartoon buddy to read about, this good-hearted king of detention.” - Horn Book (starred review)

Praise for BIG NATE STRIKES AGAIN: “Fans will be in heaven; thank goodness number three is already on the way.” - Kirkus Reviews

Praise for BIG NATE STRIKES AGAIN: “Even the most jaded middle-schooler will find much to laugh about here.” - The Horn Book

Praise for BIG NATE ON A ROLL: “[T]he slickest of this series...On a roll indeed!” - Kirkus Reviews

Lincoln Peirce began creating comics in the 6th grade (just like Big Nate!). He went on to teach art at a New York City High School. Lincoln created the cartoon-strip character Big Nate in 1991, naming the character after a nickname he gave his older brother as a kid. He lives in Portland, Maine in the US and as well as creating Big Nate comic strips and books, he hosts a local radio show.

Other Works by Lincoln Peirce

How Harry Riddles Made a Mega Amount of Money (Shoutykid, Book 5)