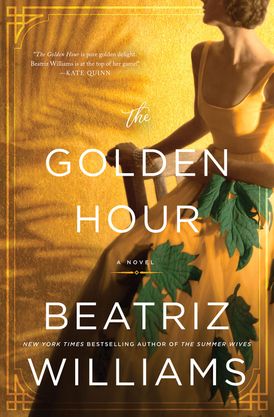 “The Golden Hour is pure golden delight Beatriz Williams is at the top of her game.” —Kate Quinn, New York Times Bestselling Author of The Alice Network

Beatriz Williams, the New York Times bestselling author of The Summer Wives, is back with another hot summer read; a dazzling epic of World War II in which a beautiful young “society reporter” is sent to the Bahamas, a haven of spies, traitors, and the infamous Duke and Duchess of Windsor.

The Bahamas, 1941. Newly-widowed Leonora “Lulu” Randolph arrives in the Bahamas to investigate the Governor and his wife for a New York society magazine. After all, American readers have an insatiable appetite for news of the Duke and Duchess of Windsor, that glamorous couple whose love affair nearly brought the British monarchy to its knees five years earlier. What more intriguing backdrop for their romance than a wartime Caribbean paradise, a colonial playground for kingpins of ill-gotten empires?

Or so Lulu imagines. But as she infiltrates the Duke and Duchess’s social circle, and the powerful cabal that controls the islands’ political and financial affairs, she uncovers evidence that beneath the glister of Wallis and Edward’s marriage lies an ugly—and even treasonous—reality. In fact, Windsor-era Nassau seethes with spies, financial swindles, and racial tension, and in the middle of it all stands Benedict Thorpe: a scientist of tremendous charm and murky national loyalties. Inevitably, the willful and wounded Lulu falls in love.

Then Nassau’s wealthiest man is murdered in one of the most notorious cases of the century, and the resulting coverup reeks of royal privilege. Benedict Thorpe disappears without a trace, and Lulu embarks on a journey to London and beyond to unpick Thorpe’s complicated family history: a fateful love affair, a wartime tragedy, and a mother from whom all joy is stolen.

The stories of two unforgettable women thread together in this extraordinary epic of espionage, sacrifice, human love, and human courage, set against a shocking true crime . . . and the rise and fall of a legendary royal couple.

“The Golden Hour is pure golden delight Beatriz Williams is at the top of her game.” — Kate Quinn, New York Times Bestselling Author of The Alice Network

“Original and fascinating. Lulu herself is an excellent creation, tough, smart, sexy, and ruthless… A fresh take on the WWII love story, with a narrator who practically demands Myrna Loy come back to life to play her in the movie.” — Kirkus (starred review)

“Bestselling author Beatriz Williams skillfully sets a story of love and sacrifice against the backdrop of war in her fascinating new novel… Readers will be spellbound by Williams’ elegant prose, fascinating characters and unforgettable settings while fully engrossed by the novel’s dual plots.” — Bookpage

“The stories of two remarkable women a generation apart are cleverly entwined in Williams’s sweeping family saga… Williams illuminates the story with exotic locales and bygone ambiance, and seduces with the irresistible Windsors. Readers will appreciate the wartime espionage that keeps the suspense high.” — Publishers Weekly

“Beatriz Williams always delivers historical fiction that shines, and this summer’s release is no exception… The Golden Hour is another engrossing read that will keep you turning the pages long into the night.” — Popsugar

“A shocking death under the Caribbean sun. A cover-up with a whiff of royal privilege. Williams mixes those ingredients with spies, swindles, love affairs—plus a dash of racial animosity—and the result is a zesty romantic cocktail.” — Bloomberg

“With her trademark skill, the author adeptly draws the threads of the two story lines together, culminating in a surprising, emotionally satisfying conclusion. Williams’ latest is moving, well-researched, and compulsively readable to the very last page.” — Booklist