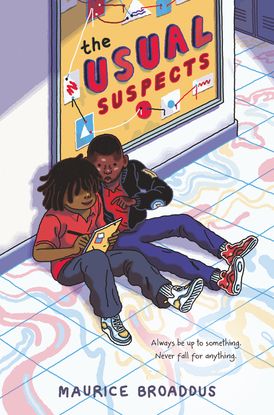 Thelonius Mitchell is tired of being labeled. He’s in special ed, separated from the “normal” kids at school who don’t have any “issues.” That’s enough to make all the teachers and students look at him and his friends with a constant side-eye. (Although his disruptive antics and pranks have given him a rep too.)

When a gun is found at a neighborhood hangout, Thelonius and his pals become instant suspects. Thelonius may be guilty of pulling crazy stunts at school, but a criminal? T isn’t about to let that label stick.

“Readers will love watching these two uniquely gifted black boys explore the complicated tensions between impulses and choices, independence and support, turnin’ up and getting through.” - Kirkus Reviews (starred review)

“A rare and much-needed glimpse into the world of exceptional learners.” - School Library Journal

“[Broaddus] sheds revealing light on the nature of systemic profiling, based on class, race, and neurodiversity, at schools and within society.” - Publishers Weekly

Through its discerning, young Black protagonist, [The Usual Suspects] tackles difficult subjects with nuance, humor, and heart, always bringing it back to the characters. A great choice for upper middle-graders in search of a fun and meaningful read. - Booklist

"I want this book, so full of wit and intelligence, raw honesty and clever plotting, to be so well known that when I say “The Usual Suspects” to a room of librarians, their first thoughts involve neither Casablanca or Keyser Soze but this work by Maurice Broaddus."
- School Library Journal Review of the Day

Maurice Broaddus, a community organizer and teacher, has written and edited short stories for a number of magazines as well as authoring several novels and novellas for adults. Learn more about him at www.mauricebroaddus.com.

Other Works by Maurice Broaddus